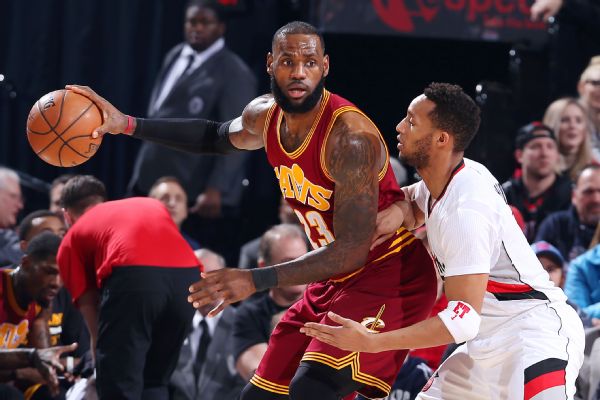 PORTLAND, Ore. -- After a 102-86 loss to the Trail Blazers on Wednesday extended the Cleveland Cavaliers' slump to three losses in their past five games, the defending champs admitted that a lack of practice time is catching up to them.

The Blazers loss marked two weeks to the day since Cleveland's last practice on Dec. 28. Since then, the Cavaliers have been upended by a series of events -- a hamstring injury for Kyrie Irving, food poisoning for Kevin Love, a roster-shuffling trade to acquire Kyle Korver and a wild travel day to get to Portland-- that has left the team pining for a sharpening session on the practice court.

"Not only to get Kyle integrated and comfortable, but we just need a little touch up," Love said. "Whether it's some of our shots or some of our plays, getting out in transition, playing with pace. We're always a better team when we do that. Practice time would be great for us, but it's just hard to find right now."

Korver has been particularly put out by the Cavs' schedule. After joining the team Sunday in Phoenix, he missed two workout opportunities with the group as Cleveland canceled practice in Phoenix on Monday and Korver was held out of shootaround in Utah on Tuesday as he awaited Mike Dunleavy to report to the Atlanta Hawks so the deal would become official.

Korver is just 2-for-10 from the field and 0-for-5 from 3 in his first two games with the Cavaliers.

"Schedule, injuries, sickness, a lot of stuff," Cavs coach Tyronn Lue said. "But I mean it's no excuse. We know what we're doing, what we're supposed to do. Right now it's like, we're not going to have assists if we're not making shots [and] shoot 34 percent [like Cleveland did against Portland]. I mean, how many assists can you really get? Just got to do a better job of making shots but also finishing around the basket when we get in the paint, and get in the paint instead of taking tough shots, kicking it out for open shots. Just got to read and play the game the right way."

Cleveland had only 14 assists against 15 turnovers against the Blazers.

"We can't continue to have more turnovers than assists," LeBron Jamessaid. "We never win those games."

In January, the Cavs are averaging 15.7 turnovers per game and only 15.3 assists. They haven't topped 20 assists as a team since Dec. 29 against the Boston Celtics when they dished out 29.

"Just from a momentum standpoint, from how comfortable we are in controlling the game, we don't live and die by the 3, but it's a big part of our game so we just got to knock down shots and be ready to shoot," said Irving, who is 9-for-34 (3-for-10 from 3) in the Cavs' last two losses.

Cleveland will take Thursday off, play Friday in Sacramento, take Saturday off and finally practice again on Sunday for the first time in 18 days to prepare for another Finals rematch with the Golden State Warriors on Monday.

"We get one on Sunday in Golden State," James said of practice. "We need it. Just to get on the court, just to get re-acclimated on what needs to be done. Get Kyle acclimated on what needs to be done. There's only so much film [study] and watching film [you can do], and [we] didn't get an opportunity to have a walk-through [Wednesday] morning because of the situation [Tuesday] night. So we need it."

In the meantime, Cleveland will try to shake its losing streak -- only the second time all season it has lost multiple games in a row -- in Sacramento.

"Shootaround and practice are two completely different things," Irving said. "And you appreciate it more, the practice standpoint, when you're able to practice things that you'll eventually [use]. We do an incredible job, T-Lue and our coaching staff do an incredible job preparing us. [Wednesday] there were a few things that we tried to do out there on the floor. It was kind of on the fly. We showed up to the arena, we're showing [on defense] on the pick-and-rolls, and usually we have some visual guys, some auditory learners and different guys on the team [who pick up instructions through drill work].

"So practice does the mind good and the body good sometimes, and I think we're in need of it, but we're on a West Coast road trip, West Coast swing, and we just got to make do with what we have."