Cavs' Kevin Love has surgery on left knee, out 6 weeks 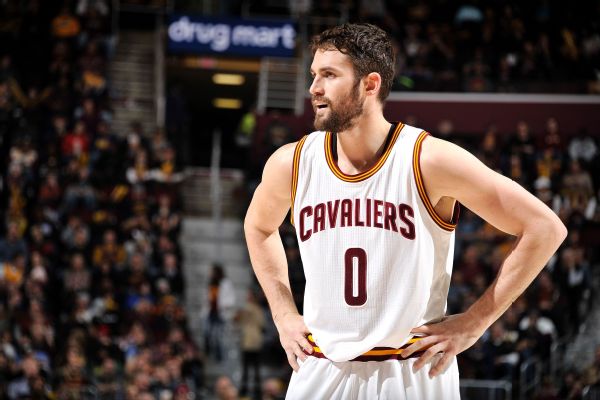 MINNEAPOLIS --Cleveland Cavaliers forward Kevin Love underwent arthroscopic surgery on his left knee and is expected to be out of the lineup for six weeks, the team announced.

The surgery, performed by Dr. David Altchek on Tuesday in New York, removed a "loose body" from the knee.

"Sucks," LeBron James saidbefore the Cavs' shootaround Tuesday morning, in advance of their game against the Minnesota Timberwolves. "It's just our road every season. One of our key guys get hurt and this year has probably been the worst out of all years -- having our starting 2-guard [J.R. Smith] out for so long and now having our All-Star power forward out for an extended period of time.

"It's just next man up and we just hope for a healthy and speedy recovery for our All-Star."

Love's rehabilitation will cause him to miss this weekend's All-Star Game in New Orleans.It was his first invite to the February festivities since joining the Cavs in 2014, and fourth overall.

Also on the injured list is Smith, expected to miss a minimum of three more weeks after suffering a thumb injury on his shooting hand in December that required surgery. Chris "Birdman" Andersen and Mo Williams underwent knee surgeries this season, prompting general manager David Griffin to trade both players to free up open roster spots.

Should Love return in six weeks, as estimated by the Cavs, he would still have about two weeks of the regular season (or nine to 10 games) to get ready for the playoffs.

"We don't want to rush those guys back," Cavs coach Tyronn Lue said. "Health is the most important thing, we know that, and with two of our starters being out, we got to step up and play better. And I know we will. I'm confident that we'll play well so guys got to be ready to play."

Love, who is averaging 20.0 points and 11.1 rebounds this season, suffered the injury sometime during the Cavs' recent four-game road trip; the pain and swelling became apparent following Cleveland's125-109 win over the Denver Nuggets on Saturday.

Lue said he will start Channing Frye in Love's place against the Wolvesand Wednesday against the Indiana Pacers. He also said James Jones will get some fill-in opportunities at the starting stretch-4 spot and mentioned James and Derrick Williams as other players who will be relied upon.

Lue doesn't want to rely too much on James, who is tied with Toronto's Kyle Lowry as the league leader in minutes per game (37.6).

"We're still going to go about our plan," Lue said, referring to the team's goal to drop James' playing time to 32-34 minutes a night. "We can't run LeBron into the ground because Kevin is out. Guys got to step up and be ready to play."

When asked if he relished the chance to step up without Love, James quipped, "I've never stepped down."

"It's been a burden on me since I got drafted," James said. "Why does it change now? Ain't nothing changed. I have my guys ready to play every single night."

Cleveland has experience playing elite-level basketball without Love in the lineup. After Love suffered a season-ending shoulder injury in the first round of the 2015 playoffs, the Cavs reeled off 10 wins in their next 13 games to go up 2-1 on the Golden State Warriors in the NBA Finals, before losing Games 4, 5 and 6.

"Listen, at the end of the day, injuries are a part of the game and we hate that it happened to our All-Star, but we have guys that are ready to go," James said. "Not feeling sorry for ourselves. We will be ready to play against whoever we step on the floor with."

The Cavs (37-16) have a two-game lead over the Boston Celtics for the No. 1 seed in the East. While Cleveland would like to hold that position for the postseason, Lue said the Cavs won't compromise their players' long-term health to do so.

"It's always important because we play so well at home," Lue said. "And in the playoffs last year, we didn't lose a game at home until the Finals. ... So our fans and the city of Cleveland is great for us. But our team, if you want to be a championship team, you got to be able to win on the road.

"So I'll take health any day. And every round we've played in, we've won on an opposing team's floor. So we know we can win on the road. Health is more important to me right now, especially with guys being out."