Cavs torn on No. 1 heading into draft 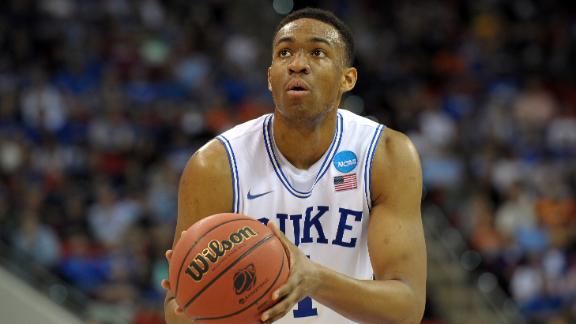 Just two days before the NBA draft, the Cleveland Cavaliers are split on whether to take Jabari Parker or Andrew Wiggins with the top overall pick, multiple sources told ESPN.com.

"They are torn," one source close to the situation told ESPN.com. "They met for three hours, and all they talked about was those two guys."

Added another industry source: "They haven't come to a decision yet."

With multiple trade offers coming in and LeBron James deciding to opt out of his contract today, the Cavs' decision may have just got even harder.

The Philadelphia 76ers, Orlando Magic and Utah Jazz have all offered their high lottery picks plus a veteran to move up to No. 1.

Of the offers they've received, a source says the Cavs aren't enamored by either the Sixers' offer (Thaddeus Young and the No. 3 pick) nor the Jazz's offer (Derrick Favors and the No. 5 pick). However, the Cavs do have some interest in the Magic's offer of Arron Afflalo, the No. 4 pick and the No. 12 pick.

The Cavs have strong interest in luring James back to Cleveland this summer and know they need to add more pieces to make the team more attractive. Afflalo is a veteran guard who both defends and shoots the three and would be a nice addition to the Cavs' backcourt.

If the Cavs keep the pick, they also may have to factor in who would be most likely to lure James.

Cleveland general manager David Griffin had decided to choose 7-footer Joel Embiid with the No. 1 pick, sources told ESPN.com. However, that changed when it was discovered that Embiid needed surgery on his foot that could sideline him for much of -- if not his entire -- rookie season.

For the past few days, the Cavaliers, according to sources, have been leaning toward selecting Parker. The 6-8 forward averaged 19.1 points and 8.7 rebounds as a freshman at Duke last season. He would address some of Cleveland's most pressing needs: shooting, basketball smarts and toughness. If the Cavs lose Luol Deng to free agency as widely expected, they will need help at small forward.

Furthermore, owner Dan Gilbert has given a mandate to ownership to turn this roster into a playoff squad this season. Parker is, by virtually all accounts, the most NBA-ready prospect in the draft.

However, Parker's workout on Friday in Cleveland was a disappointment, according to multiple sources. Parker weighed in at 254 pounds with 11 percent body fat, more than 10 pounds above his playing weight at Duke. Sources say the workout was so bad that he appeared disinterested at times. One source even went as far as to say that Parker appeared to be "tanking" the workout.

"He was bad," one source told ESPN.com. "He was huffing and puffing early in the workout."

The Cavs also have concerns about which position Parker ultimately will play in the NBA. They, along with other teams, think he'll struggle to guard NBA 3s and ultimately end up playing like a stretch power forward. With Tristan Thompson and Anthony Bennett already on the roster, Parker may not be as good of a fit as it first appeared.

Meanwhile, the athletic 6-8 Wiggins went to Cleveland on Wednesday and shot the ball extremely well -- which is considered one of his primary weaknesses. Wiggins also showed off his elite athletic abilities and generally wowed ownership during the workout.

Although Wiggins doesn't yet have the offensive game that Parker does, he is much more athletic and is already an elite defender. The Cavs struggled nightly to guard anyone on the perimeter last season, and Wiggins could change that. The Cavs also believe that although Wiggins is more of a risk and not as ready as Parker to contribute right away, he has the higher upside.

"You can't base everything on one one-on-none workout," a source said. "But Wiggins was great and Jabari wasn't. It makes an impact. It makes you go back and reassess everything you saw during the year."