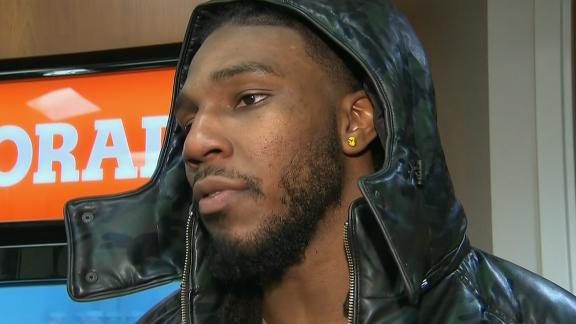 Boston Celtics coach Brad Stevens said he was surprised by Jae Crowder's comments suggesting that he felt disrespected by Boston fans who cheered forGordon Hayward before the game Tuesday against the Utah Jazz.

Recognizing that Hayward will be a potential free agent this offseason -- and given his Butler University connections to Stevens -- some Celtics fans cheered for the Jazz forward during lineup introductions.

Crowder, who plays the same position as Hayward, said immediately after the game that cheering for Hayward was a "sign of disrespect to me from the fans" and then went on social media to continue voicing his frustration.

During his weekly interview with Boston sports radio 98.5 the Sports Hub on Wednesday, Stevens said he talked with Crowder on Wednesday morning and suggested that Crowder's body of work since arriving in Boston suggests he's all-in on being a Celtic.

"I talked to Jae this morning and the first thing he said was, obviously, he wished that he wouldn't have expressed himself like that," Stevens told the "Zolak & Bertrand" program. "But we talk all the time about embracing the expectations of being an athlete here in Boston because I do think this city is such a tremendous sports town and offers our guys such an opportunity to grow and feel those banners above us, and feel the expectations of really being a team-first player, then playing as hard as you can. A lot of our guys have embraced that. I don't know that anybody has embraced it as much as Jae over the last few years.

"To be honest, I was somewhat surprised to read what he said and tweeted. I told him that this morning because, every day that he comes in, you can tell that he's thankful to be a Celtic, and every time we have that talk about how you represent Boston as an athlete and how tough you have to be to be well-liked here, I've always thought that Jae represented the best of that. I was surprised but I think his body of work over the last two years is a better example of his appreciation for where he is and obviously playing here. I love what he brings to our team and I think that everybody would agree with me on that. I think it's just an emotional reaction, and onward we move."

The Celtics, idle until a visit Friday by the Philadelphia 76ers, did not practice on Wednesday. Crowder will likely address the media before practice Thursday.

Crowder deleted some of his Twitter interactions with Boston fans following the game Tuesday, including one in which he suggested he would be fine leaving Boston if he isn't wanted there, but left up his original tweet that expressed disappointment in fans cheering an opposing player.