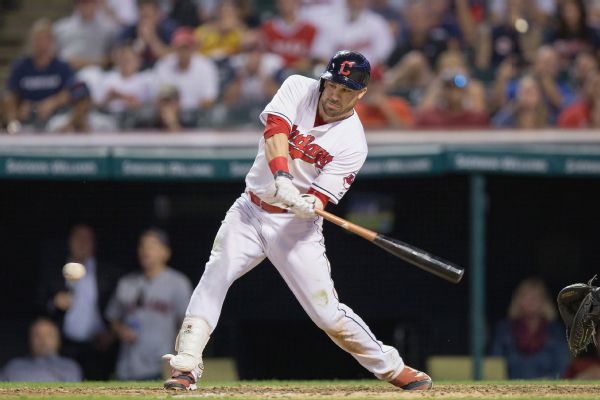 CLEVELAND -- Jason Kipnis was raised on Chicago's North Side, and like so many other kids, he grew up idolizing Ryne Sandberg, watching Sammy Sosa smash home runs and listening to Harry Caray.

And he never once blamed Steve Bartman -- they went to the same high school, by the way.

"We have a joke," the Indians second baseman said, referring to the infamous fan vilified in Chicago for a failed attempt to catch a postseason foul ball. "The only thing I'm mad at Bartman for is missing an easy flyball."

Kipnis wishes those Chicago fans who haven't been able to let go would finally forgive Bartman and turn an ugly moment into something special.

"I would love to see him throw out a first pitch," he said. "Everyone would go nuts."

Kipnis was in high school when Bartman, innocently sitting in a front-row seat down the left-field field lane, became an unintentional celebrity in Game 6 of the National League Championship Series in 2003. The slight man, wearing a Cubs cap and headphones so he could listen to the game on the radio, reached out and tried to catch a foul ball in the eighth inning as Cubs outfielder Moises Alou tried to close in.

The Cubs were derailed during the "Bartman Game," blowing a big lead and losing, and then dropping Game 7 to the eventual world champion Marlins.

Kipnis lived close to Bartman and "very vividly" remembers seeing police staked out around his house to prevent any zealous fans from getting at him. There are Cubs fans to this day who hold a grudge toward Bartman. He has remained in hiding.

"He didn't deserve that," Kipnis said. "He never asked for all the stuff that probably happened to him afterward. I don't think he deserved any of that. He was probably actually a pretty loyal fan and he wanted a ball, and it's just the way events turns that turned him into this scapegoat."

"The likelihood that he would return to throw out a first ball or anything like that is probably slim, none and no chance," Frank Murtha, a longtime friend and spokesman for Bartman, told CNN Saturday.

Kipnis now finds himself in a unique situation in his first World Series, facing the team that helped shape his life. The Cubs are in his DNA. They're the team he learned to love, the one that taught him the game and the one that often broke his heart. But while Kipnis' family and friends intend to remain true to their Cubbies over the next week, his loyalties are not divided.

"There's zero conflict at all," he said Tuesday on the eve of Game 1. "Let's be clear about that."

Kipnis, though, said watching the Cubs wrap up their first NL pennant since 1945 on TV was emotional. Some of his friends were at Wrigley Field on Saturday night, and when the last out was recorded, part of Kipnis was there, too.

"I didn't know how to handle it," he said. "I didn't know if I was happy, mad, sad. I was emotional. I was choked up, I was like, 'Oh, no, what does this mean right now?' But it's nothing more than excitement for the games."

He was 11 in that magical summer of 1998 when Sosa and Mark McGwire seemed to belt a home run in every at-bat. Baseball was bulked up and booming and Kipnis was under its spell.

As he reminisced during an interview session, the two-time All-Star seemed to remember every swing.

"That's when I was really watching baseball closely and turning into a baseball fan," said Kipnis, who is dealing with a sprained left ankle suffered in Cleveland's ALCS celebration. "In the '98 season, it was 'Hey, Sammy's up, get to a TV every time.' And on WGN there were always recaps of the games. That's pretty much what I grew up on."

Despite his Second City roots, Kipnis knows he'll be treated like a complete stranger -- and sworn enemy -- when the Series shifts to Wrigley for Game 3. He's taking solace that there will be a few welcomed faces in the crowd.

But the Friendly Confines won't be very friendly.

He wouldn't have it any other way.

"If they're Cubs fans, they'll boo as they should if you're a baseball fan," he said. "But I'll have enough there that you'll hopefully hear a couple cheers."

Kipnis knows what a championship would mean to fans for both teams, who have gone a combined 174 seasons without celebrating a World Series title.

"They have the only drought that could make our drought look small," he said. "They've got us by 40 years. Both franchises have been yearning for this championship, but it's pretty neat one of them will come to an end."

And Kipnis isn't torn over which one he hopes continues.

"There's not one part of me that doesn't wish this curse would keep going," he said.