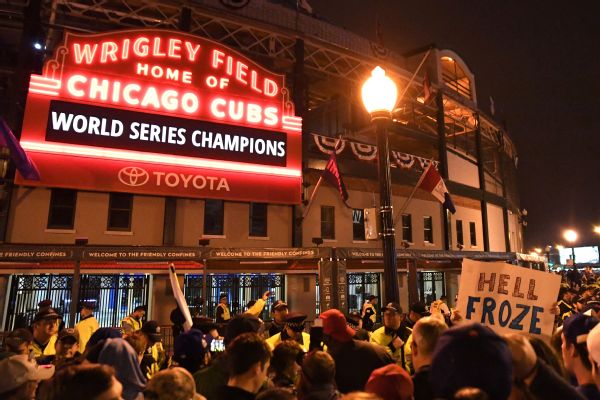 CHICAGO -- Ecstatic Chicago Cubs fans are expected to amass downtown Friday for a parade and rally to honor the new World Series champions.

The celebration of the Cubs' first title in 108 years will kick off when team buses leave Wrigley Field at 10 a.m. for an official launch of the parade at 11 a.m. The procession will begin at the intersection of famed Michigan Avenue and Oak Street, heading south, then continue along Columbus Drive to Grant Park for a noon rally.

"The City of Chicago could not be more proud of the Cubs, and we are going to throw them -- and their fans -- a celebration worthy of the history the team made last night," Mayor Rahm Emanuel said Thursday in a release.

"This is a celebration for past and present fans along with all the Cubs' legends who never gave up hope," he said.

The noon rally will be held at Grant Park's Hutchinson Field. The celebration comes two days after the Cubs' dramatic 8-7, extra-inning Game 7 victory in Cleveland.

About 2 million people attended a parade and rally when the NHL's Chicago Blackhawks won the Stanley Cup in 2015, according to city estimates.

Fans attending the Cubs rally must pass through security screenings, city officials said. Closed water bottles will be allowed into the rally and food vendors will be on site. City officials said there will be "zero tolerance" for drinking.

The city's 390,000 public-school students will be able to attend. Friday was already a scheduled day off for Chicago Public Schools.