Chris Bosh: 'We can move on' 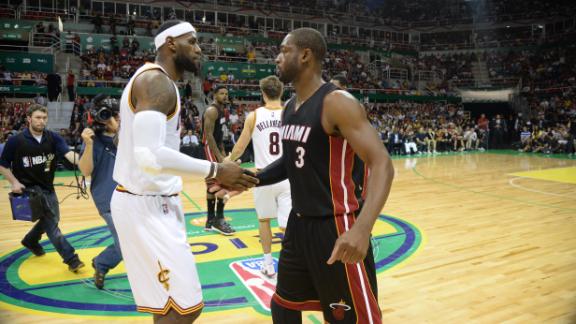 RIO DE JANEIRO -- The Miami Heat were relieved to get their first meeting with LeBron James out of the way, to help with what they hope is a process of moving on.

The pro-Heat crowd at the sold-out HSBC Arena in suburban Rio booed James when he was introduced and the first few times he touched the ball Saturday, even though the stands were dotted with fans wearing now outdated No. 6 James jerseys.

James embraced his former teammates before tipoff of the Cleveland Cavaliers' 122-119 overtime win Saturday night in part of what was an uncomfortable first meeting since he signed in Cleveland.

"There was a certain level of strangeness to it," Heat coach Erik Spoelstra said. "I think it benefits both teams to get the awkwardness out of the way in the preseason."

At the conclusion of overtime, the two teams headed to their locker rooms, but James broke off and hugged Mario Chalmers and Dwyane Wade before leaving the floor. James had said Fridayhe was "surprised" at some of the comments Heat players had made recently, with Wade saying he didn't have fun the past season and Chris Bosh saying he found playing with James frustrating in certain ways.

"I like the fact we could get everything out of the way," said Bosh, who had 19 points in the game. "Just let everybody see it, so we can move on. As far as seeing LeBron on another team, we're pretty much over that now."

James had his odd moments, too. During the first half, he was playing defense when former Heat teammate Norris Cole called for a pick-and-roll. James bizarrely jumped out and set a pick on his own teammate, Matthew Dellavedova, and the result was a wide open shot for Udonis Haslem. Otherwise, though, James seemed unaffected.

"It was a special moment, competing against my old team," said James, who had seven points and eight assists in 20 minutes. "I didn't get an awkward feeling. I did get a lot of memories coming back. It was definitely great getting to see them."

Impressions Of Cavaliers After OT Win Over Heat
Jalen Rose shares his impressions of the Cavaliers after they beat the Heat 122-119 in overtime, and explains what Cleveland has to do to ensure a long playoff run.