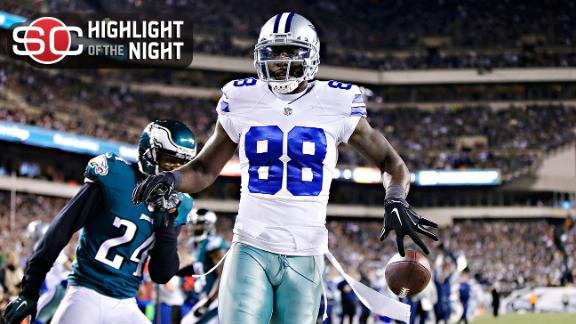 New Jersey Gov. Chris Christie defended his longtime love for the Dallas Cowboys on Monday after his cheering for the team sparked a social media firestorm.

The interactions prompted a wave of hate on Twitter from angry Eagles fans, who apparently were unaware the governor has long been a Cowboys fan despite his New Jersey roots.

Christie responded to the meltdown Monday morning with an unscheduled appearance on WPG Talk Radio 1450.

He told listeners he's never made a secret of his Cowboys fandom and said he would never change his team loyalties to score political points.

"I don't react in that way, but I'm an enthusiastic Dallas Cowboys fan. I've never made a secret of it from the time I entered public life."

He also took to Twitter to respond to some of the kinder commenters.

Tony Romo After The Cowboys' Win
Tony Romo talks to Sal Paolantonio after throwing for 265 yards and three touchdowns as the Cowboys improved to 7-0 on the road with the win over the Eagles.
Related topics:
sportsespnchris christiephiladelphia eaglesjerry jonesnfldallas cowboys
Copyright © 2021 ESPN Internet Ventures. All rights reserved.
TOP STORIES
CDC reverses course on indoor masks in some parts of US
Some Wake parents OK with masks as long as kids can be in class
Mental health experts applaud Biles' tough decision at Tokyo Games
Why this Haitian restaurant relocated from Brooklyn to Edgecombe Co.
LATEST: Cooper to 'review changes to CDC guidance'
800K COVID-19 vaccine doses in NC could expire by end of August
Show More
As COVID-19 cases surge, nervous parents prepare for school year
1 dead in movie theater shooting during showing of 'The Forever Purge'
495 new hepatitis A cases reported in NC this year
4-year-old dies after report of drowning in Harnett County
Mother, boyfriend charged after 5-year-old's death in Aberdeen
More TOP STORIES News