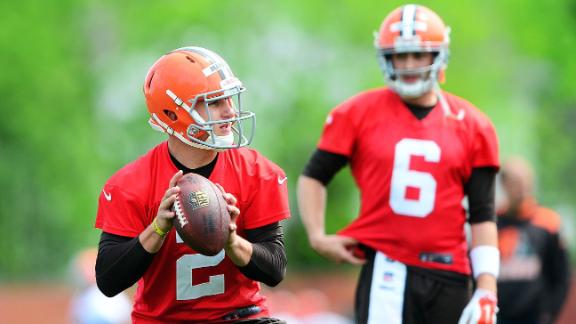 "It's something that was a hot topic for the offseason just because of who he is," Pettine said Monday as the Cleveland Browns prepare for the start of training camp on Saturday. "It's a very unique thing. I don't think he can get a handle on the why. Is his behavior that much different from the average NFL player?"

Pettine did not seem to think that it is, but he said that the people with whom Manziel circulates -- Drake, Justin Bieber -- might be different.

Pettine said he never thought that the photos posted of Manziel in Las Vegas, Los Angeles, Texas or Mexico this offseason reflected badly on the team.

"I just think to overreact to stuff that's occurred before he's even taken a snap in training camp, we weren't going to do that," he said. "And it's been such a small sample of him being here. While he's been here, he's been great.

"We always say, if we see it start to affect his job, then I think there would be much more of a cause for concern."

At the same time, Pettine said quarterbacks are held to a higher standard because of the leadership position they play.

"We talk about playing like a Brown," Pettine said. "We've added act like a Brown. I think that's important. Is it more important for a quarterback? I think so. There's a certain standard when you're a leader and guys look to you."