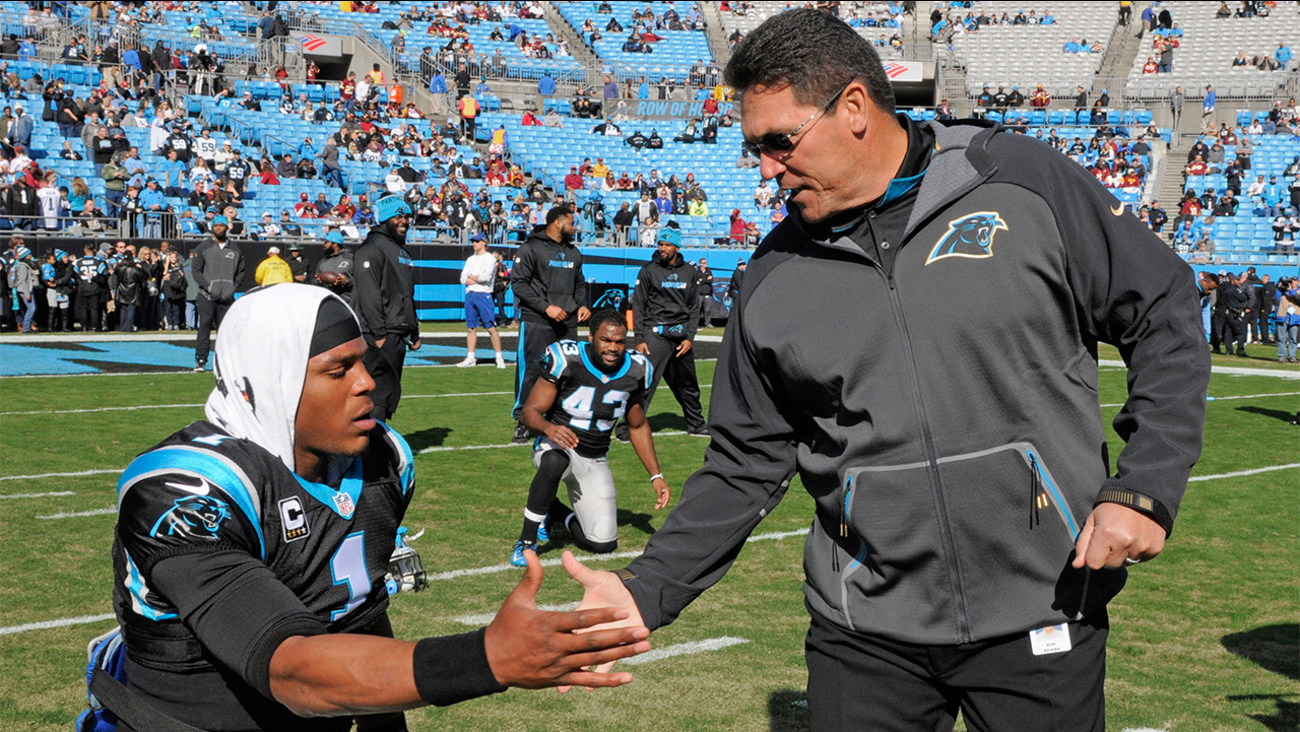 ESPN
By David Newton
CHARLOTTE -- Carolina Panthers coach Ron Rivera has issued a challenge for Cam Newton to be better than the quarterback was during his 2015 MVP season.

Newton threw a career-high 35 touchdown passes and rushed for 10 more in leading Carolina to a 15-1 regular season and ultimately the Super Bowl, but Rivera believes his sixth-year quarterback can be better.

And not in just one category.

"Everything," Rivera said during Tuesday's first practice of Phase 3 offseason workouts. "Last year we talked about developing certain throws and he did that. Can he develop and get better physically? Yeah. His skill set can continue to get better.

"I know they're constantly working on his technique, his footwork, his delivery ... and then again work on the mental aspect as well. I'm not putting anybody on blast. I'm just challenging him that he can become a better football player."

He had a career-best 99.4 passer rating and threw five touchdowns in a game three times during a five-game stretch. In his final 10 games prior to the Super Bowl, Newton threw 26 touchdowns with only three touchdowns for a rating of 119.1.

"We can't expect to just show up and be where we left off," Rivera said. "We've got to start from the bottom and work our way up, and that's what we're doing."

That was Rivera's message to the entire team on Tuesday, reminding players they have 107 days until the season begins.

"I want to make sure we understand the sense of urgency," he said. "I don't want everybody to be out here figuring out, 'Well, we'll pick it up when it's time.'

"The message out here is you don't start from where you finish, you start from the beginning. That's what we're doing.''

Rivera characterized Newton's practice in which he was picked off by outside linebacker Shaq Thompson during team drills as "rusty."

"He threw some really good balls. He made some good decisions,'' Rivera said. "But at the same time he threw some bad balls and the decisions were -- a couple of them were a little bit late."

But, as Rivera reminded, that's part of the process of improving.

"What Cam has really got to do is continue to grow," he said. "He's such a dynamic football player athletically and mentally that every time he gets out there he can improve and become better.

"I'm just excited about having him out here working with the guys."