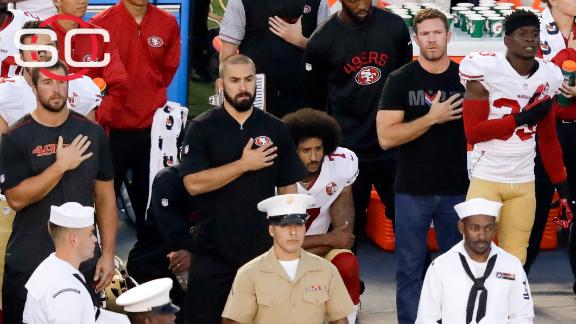 On Sunday, Kaepernick vowed to continue sitting during the national anthem until he was satisfied with the changes made toward ending racial oppression in the United States.

But after a roughly 90-minute discussion with Nate Boyer, the former Army Green Beret and long-snapper, and safety Eric Reid at the team hotel on Thursday afternoon, Kaepernick shifted gears in an effort to be more respectful to those offended by his protest.

"We were talking to him about how can we get the message back on track and not take away from the military, not take away from pride in our country but keep the focus on what the issues really are," Kaepernick said. "As we talked about it, we came up with taking a knee because there are issues that still need to be addressed and there was also a way to show more respect for the men and women that fight for this country."

So when the national anthem began playing Thursday night at Qualcomm Stadium, Kaepernick and Reid took a knee while Boyer stood next to them.

For the rest of the night, the San Diego Chargers celebrated their "Salute to the Military" night for the 28th year with various tributes to the troops throughout. Kaepernick knelt during the anthem, applauded veterans and active military during a first-half break with Lee Greenwood's "God Bless the USA" playing and stood for a rendition of "God Bless America," clapping at the end of that as well.

"Once again, I'm not anti-American," Kaepernick said. "I love America. I love people. That's why I'm doing this. I want to help make America better. I think having these conversations helps everybody have a better understanding of where everybody is coming from.

After the game, Kaepernick spent time signing autographs for a large contingent of 49ers fans who stuck around until the end of the Niners' 31-21 win in the preseason finale. He then spoke to the media for more than 16 minutes, announcing that he plans to donate the first $1 million he makes this year to help communities in need as part of his plan to take a more active role in combating racial inequality.

"It was something I was thinking about to try to make sure that I'm not just talking about something but I'm actively being involved and actively trying to make a change in these communities and I've been very blessed to be in this position and be able to make the kind of money I do and I have to help these people," Kaepernick said. "I have to help these communities. It's not right that they're not put in the position to succeed or given those opportunities to succeed."

Earlier in the week, Boyer penned a letter to Kaepernick on ArmyTimes.com, a letter Kaepernick read and which spurred Kaepernick to invite Boyer to attend the game as a guest of him and the team.

Boyer told ESPN that he and Kaepernick had never met before Thursday but he, Kaepernick and Reid had a productive conversation in which they exchanged their views and ideas on Kaepernick's stance and sought a way to be more respectful to the military during the anthem.

Reid said he began thinking about joining Kaepernick earlier in the week and the pair had a number of conversations throughout the week. But Reid had reservations about sitting down and Kaepernick understood the anger it caused in people so the conversation with Boyer helped them find a middle ground.

"He saw that it hurt people that he sat during the national anthem," Reid said. "There are people that actually put their lives on the line for this country to give us freedom. We talked for a couple days, to figure out a way to be more respectful of those people and the national anthem of the country while still maintaining the stance that there needs to be things done about these issues. And it was just today actually, a couple hours before the game, we were like, hey, why don't you take a knee and that way you're not isolated from the team, you're not sitting down during the national anthem, you're just changing your physical position, being more respectful to those people while still maintaining your stance on these issues.

"Nate agreed with that. That's how it happened."

Coach Chip Kelly told reporters after the game that he did not know Reid was planning to kneel with Kaepernick.

"I was not aware of that," Kelly said. "All I was aware of was that Nate Boyer was going to be out there."

Once the game got going, Kaepernick was greeted by boos from Chargers fans every time he stepped on the field. He led the Niners on a touchdown drive on the game's opening possession and went on to go 11-of-18 for 103 yards with four carries for 38 yards.

Kaepernick has been the subject of rumors about a possible departure from the Niners dating to the spring but made it clear after the game that he still views the 49ers as a franchise near and dear to his heart.

"This is a phenomenal organization," Kaepernick said. "I've had great conversations here. I've had great memories here. This team has given me the opportunity to become the man I am today. I'm grateful for that, I'm thankful for that. And San Francisco has become my home."

Seattle Seahawks cornerback Jeremy Lane also joined Kaepernick's protest, albeit up the coast in Oakland, taking a seat Thursday night during the anthem before a game against the Raiders.

"I've had numbers of players [reach out]," Kaepernick said. "I think there are a lot of conversations happening not only in NFL locker rooms but around the country. I've also had friends that aren't on football teams say 'I respect what you're doing, I support you' and I've had more conversations about human rights and oppression and things that need to change in the last week than I've had in my entire life. And the fact that those conversations are happening is a start."

Lane said he was simply "standing behindKaepernick" but that he was prepared for a negative reaction.

"And I don't mean no disrespect to anybody, but I'm just standing behind what I believe in,"Lane said.

When Kaepernick left the field following pregame warm-ups, he was greeted with profanity and obscene gestures from Leo Uzcategui, a 20-year Navy veteran in a military-green Chargers jersey with quarterback Philip Rivers' No. 17 in camouflage numbering.

Domenique Banks, a 23-year-old fan from nearby Oceanside, California, got the quarterback to sign his Kaepernick jersey before the game.

Information from ESPN's Paul Gutierrez and The Associated Press was used in this report.

Kaepernick: My message was taken out of context
49ers QB Colin Kaepernick shares his thoughts on being booed while playing in San Francisco's preseason game, and addresses what his original message was supposed to convey. 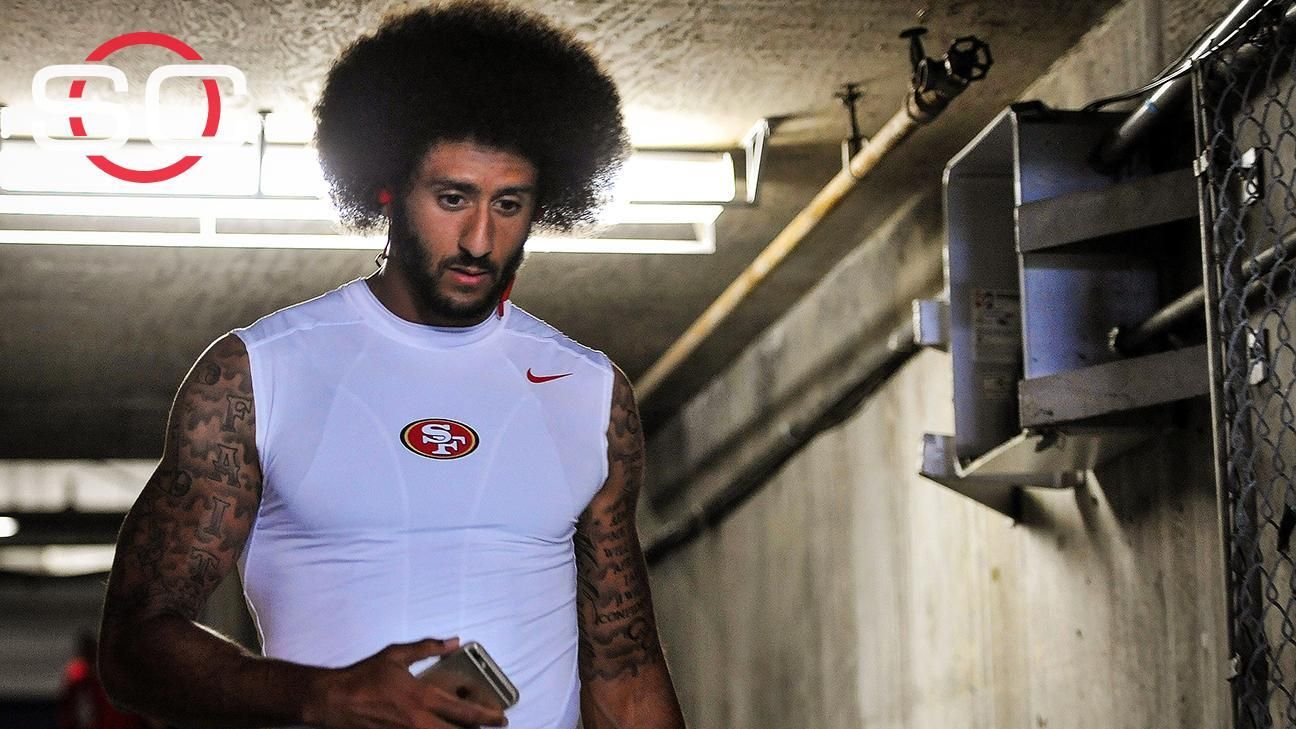