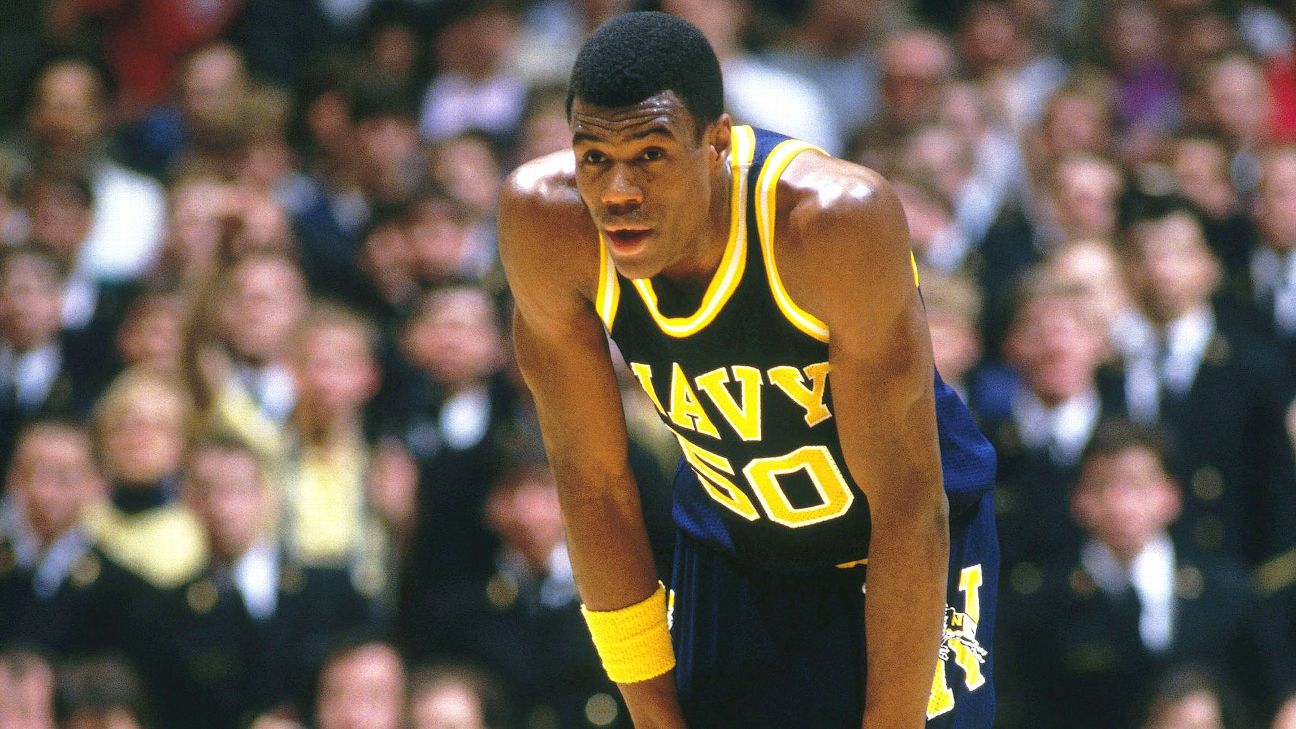 On March 19, ESPN launched SportsCenter Special: College Basketball's Greatest of All Time, a 64-player bracket celebrating the best men's and women's players ever.

ESPN writers and commentators will provide daily roundtables and predictions as the bracket advances through March 31. Below, writers Jerry Bembry, Jeff Borzello and Andrea Adelson break down the Sweet 16 in the South and Midwest regions.

Which of these eight names are you most surprised to see still standing in the Sweet 16, and why?

Jerry Bembry:Younger people today see Bill Walton as a tie-dye-wearing, weed-advocating Deadhead. I remember Walton as being among the greatest college players of all time. Which is why I'm shocked he's not still in the field. This is no knock against Wilt Chamberlain, who topped Walton in the last round. Chamberlain averaged 29.9 points and 18.3 rebounds over the course of a 48-game college career where he often had to endure triple-teams and stall tactics from opponents wanting to limit his touches. Walton, with his turnaround bank shots, incredible court vision and defensive prowess, was unstoppable in winning two national titles and producing perhaps the greatest college performance ever in scoring 44 points (making 21 of 22 shots) in the 1973 title win over Memphis State. People forget Walton's overall greatness because his NBA career fell flat due to injuries. As a young boy who was just falling in love with basketball, I remember Walton's UCLA days because in college, he was that guy.

Jeff Borzello:I guess I'm not totally surprised about Stephen Curry advancing, given his name cachet and the fact that I picked him to pull off at least one upset -- but he went through two really tough matchups to get to the Sweet 16. Maya Moore had arguably the greatest individual career of anyone from the sport's all-time greatest program, finishing as the school's all-time scoring leader, winning two Wooden Awards, making four Final Four appearances and having two perfect seasons. And David Thompson is one of the best ACC players of all time, having a perfect season in 1973 and winning the national championship in 1974. Curry was awesome in the 2008 NCAA tournament and the voters undoubtedly remember that, but he beat some stiff competition to get to the regional semifinal.

Andrea Adelson:Kevin Durant should not have advanced past the first round, let alone the second. A quick refresher: His matchup out of the gate was against Candace Parker, regarded as one of the greatest women's basketball players of all time. She's a two-time national champion and a two-time NCAA tournament MVP. In the next round, Durant squared off against Patrick Ewing, one of the all-time memorable/iconic NCAA tournament players in men's hoops history: three national championship game appearances, one title in 1984 (and Most Outstanding Player honors that year as well) and three-time All-America honors. What Durant has done in the NBA is entirely separate from his collegiate career, which lasted only one season. It is simply hard to ignore the longevity and success both Parker and Ewing had in the NCAA tournament in favor of a one-and-done who did not even make the national championship game. But the voters have spoken, and Durant moves on.

Some of the players above were undoubtedly helped by the name cachet they built during their NBA careers. But which of these players deserves more credit for their college career than the general basketball fan might be willing to provide?

Bembry:It wasn't long after I took a job as a police reporter in Baltimore in 1985 that I began to hear about this amazing player at the Naval Academy. So I drove down to Annapolis, bought a ticket to the old Halsey Field House and watched in amazement as David Robinson dominated during his junior season. Robinson didn't come from big-time programs like the majority of the remaining players, but if you watched him play at Navy -- and saw the talent limitations of the guys he played with -- you really appreciate his ability to have done more with less. I consider myself fortunate to have lived so close to Annapolis to witness the blossoming of a star.

Borzello:Kevin Durant is one of the greatest NBA players of our generation, if not all time, but his one college season was also historically good. His career ended in the second round of the NCAA tournament with a 19-point loss to USC (although Durant scored 30 points and grabbed nine rebounds) -- but individually, his one season was hard to top. He won the Wooden Award in 2007, the first freshman to ever win that award, and was the consensus Player of the Year across the board. And look at his one-year stats: 25.8 points, 11.1 rebounds, nearly two blocks and two steals, better than 40% from 3-point range. His NBA career has been terrific, no question, but he was also a transcendent player at the college level.

Adelson:I wrote about David Robinson in the first round, fully predicting his upset win over No. 6 seed Jay Williams. There may have been a small Duke factor involved, but I think Robinson's stature as one of the greatest NBA big men played a role too. But there would have been no NBA Robinson without his incredible transformation at Navy. He got into basketball late -- his senior year in high school late -- and when he arrived at the Naval Academy, he wasn't even a center. But thanks to a growth spurt that saw him reach 7 feet in his sophomore season, the transformation began. He led Navy to back-to-back NCAA tournament appearances, including the Elite Eight in 1986. In the Elite Eight run, he had 35 points, 11 rebounds and seven blocks in an upset win over Syracuse and had 23 points and 10 rebounds in the Elite Eight loss to Duke, scoring nearly half of Navy's 51 points.

Which of the above four matchups do you expect to be closest, and what's one fact you'd like to relay to voters that might help influence their vote?

Bembry:Voting in the early rounds has favored name recognition, gender and era of dominance over true college accomplishments. Now we're in a round where, in the South and Midwest regions, we have eight men with relatively big names and impressive college résumés. I think the Zion Williamson/Carmelo Anthony matchup might be the tightest for the simple fact that the two represent college dominance over the past 20 years, which -- based on voting in our early rounds -- is when college basketball was invented. Melo should win because he won a title, but Zion probably wins because his college accomplishments came last year. Side note: If you voted against Kareem Abdul-Jabbar, the greatest college player ever, in any round you should have your Knowledge of Basketball card revoked.

Borzello:Carmelo vs. Zion. Zion was ridiculous during his one season in college, but so was Carmelo -- and here's the biggest deciding factor for me: Carmelo carried Syracuse to a national championship. He was simply unstoppable in the NCAA tournament, especially in the final three games. Anthony had 20 and 10 in the Elite Eight against 1-seed Oklahoma, 33 and 14 against 1-seed Texas in the Final Four and then 20 points, 10 rebounds and seven assists in the title game against Kansas. He was the NCAA tournament Most Outstanding Player, a consensus All-American and he averaged 22.2 points and 10.0 rebounds. Zion had great numbers too, but Anthony has the trophy.

Adelson:I think the closest will be Wilt Chamberlain against Stephen Curry in a battle for NBA name recognition supremacy ... and NCAA tournament name recognition supremacy. Chamberlain played only two years on the varsity team at Kansas (back then he played on the freshman team his first year) and did not win a national championship -- although he did win Most Outstanding Player honors in 1957. His legacy grew thanks to his legendary NBA career. We can say the same about Curry, who played three seasons at Davidson and did not win a championship either. Chamberlain has a higher career scoring average and better NCAA tournament résumé, but fans do like the plucky underdog. In that regard, Curry the college player qualifies because he played for Davidson and their tournament run in 2008 remains an indelible memory to many. 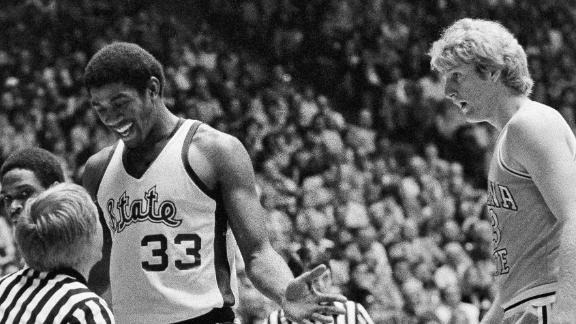