College football's most exciting players (and no Tua or Trevor!) 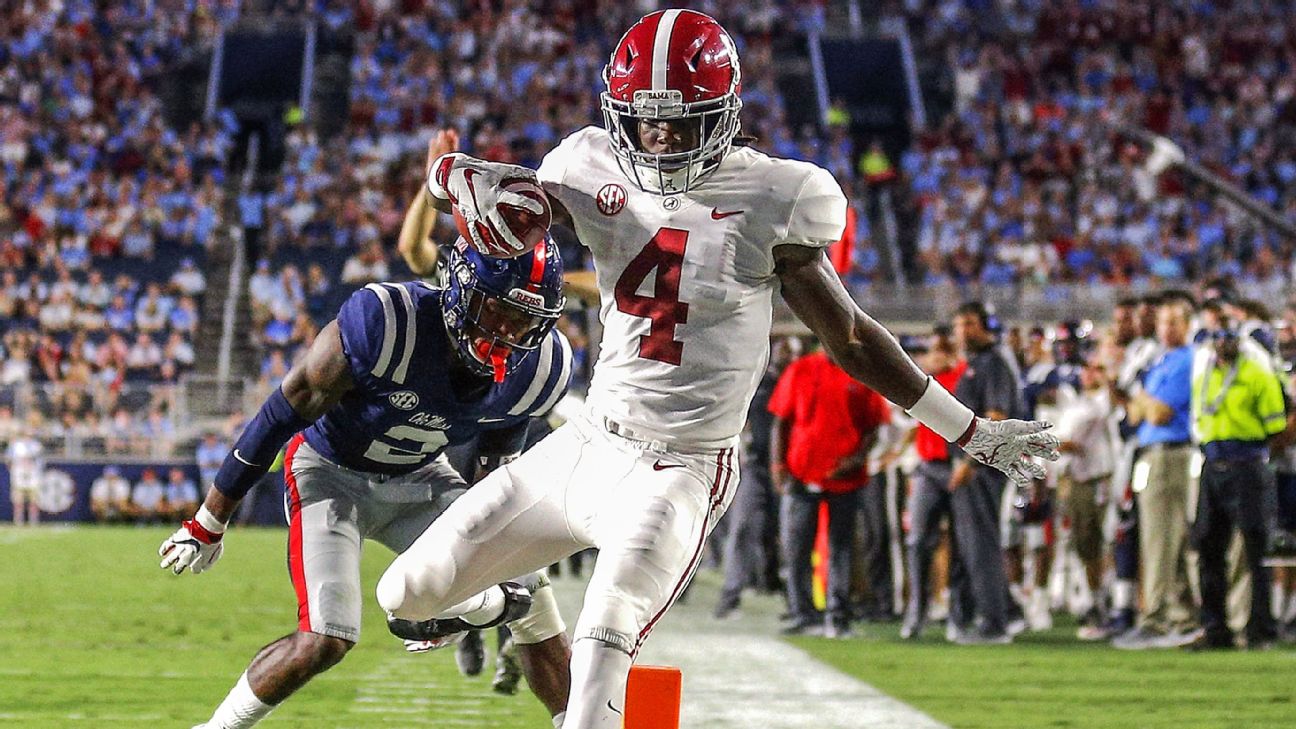 ESPN
By Edward Aschoff
The 2019 college football season is just about here. In fact, thanks to Florida, Miami, Arizona and Hawaii being so gracious and flexible, we'll get to see major college football next Saturday!

But who are the most exciting players in college football this season? Who are the guys we can't wait to see because more often than not they'll leave us speechless with a cut, run or catch that will leave their opponents dizzy?

We're glad you asked. Here are the 15 most exciting players heading into the 2019 college football season.

Don't expect to seeTrevor Lawrence or Tua Tagovailoa on this list. Yes, they are the two best quarterbacks in the country and we love just about every dazzling throw they sling, but they just aren't as exciting as the players listed below. They are superior in their own ways, just not here.

1. Rondale Moore, WR, Purdue: Maybe the most talented player Purdue has had since Drew Brees, Moore was a monster last year. As a freshman, Moore was the Paul Hornung Award recipient as the nation's most versatile player, breaking the single-season school record for all-purpose yards (2,215) and the school record for most all-purpose yards in a game (313). He tied the school record for most 100-yard receiving games (seven), and caught 11 or more passes in a game six times. He had 1,471 yards of total offense (113.2 per game) and 744 return yards last year with 14 total touchdowns. Of his nation-leading 114 catches last year, 51 went for first downs, and he led the nation with 907 yards after the catch (7.96 per catch).

2. Jerry Jeudy, WR, Alabama: Once the reigning Biletnikoff winner gets a step on you, you're toast. He averaged 19.3 yards per catch last year and had 14 touchdowns, including eight that went for 25-plus yards. The electric jitterbug also had 23 touches last season that were 12-plus-yard rushes or 20-plus-yard receptions. Of Jeudy's 1,315 receiving yards, 515 came after the catch (7.6 per reception) and he averaged 3.6 yards after first contact.

3. Jonathan Taylor, RB, Wisconsin: His 4,171 rushing yards are the most by an FBS player through his sophomore year. He leads all active FBS players in rushing at 154.5 YPG and his 6.88 YPC ranks second in school history. He has rushed for at least 100 yards in 22 of 27 career games, owns 12 games of 150-plus yards and eight games of 200-plus. Last year, 48 of his touches were either 12-plus-yard runs or 20-plus-yard receptions.

4. Justyn Ross, WR, Clemson: A true speed demon, Ross hit the 1,000-yard mark last year, averaging 21.7 a catch in the process. When the games meant more, Ross stepped up. He caught 12 passes for 301 yards and three touchdowns in Clemson's two playoff games, including a 74-yarder against Alabama in the title game. Ross doesn't just run open, he cuts his way out of trouble, too. Ross led the nation with 5.1 receiving yards per route run and Ross' six scrimmage touchdowns of at least 50-plus yards last season were tied for second most among FBS players. Ross accomplished this on only 46 total touches from scrimmage.

5. Travis Etienne, RB, Clemson: Etienne is the ultimate home run threat. Of his 204 carries last year, 44 went 10-plus yards and 768 of his 1,658 yards came after contact. He led the ACC with 39 touches that were either 12-plus-yard rushes or 20-plus-yard receptions. Oh, and he led the nation with 24 rushing touchdowns, nine of them being 17 yards or longer. Five of those were from at least 40 yards.

6. Laviska Shenault Jr., WR, Colorado: Even with health issues, Shenault still led the Pac-12 with 86 catches last year in only nine games. He caught nine or more passes in seven of those games and averaged 112.3 YPG and more than 11 yards per catch on the season. Shenault, who is fully healthy now, ranked fourth nationally last year with 3.7 yards per route run and was second nationally with 125.1 scrimmage YPG. He also had 52.3% of his receptions go for either a first down or a touchdown.

7. Jalen Hurts, QB, Oklahoma: He left Alabama and is now running a Lincoln Riley offense that produced the past two Heisman winners. Hurts amassed 7,602 yards of total offense with 71 touchdowns in three years for the Crimson Tide. The guy is one of the strongest runners you'll see at the quarterback position and cuts like a skill player in space. With a more run-friendly offense, expect a lot more of this in Norman.

8. D'Eriq King, QB, Houston: Before tearing his meniscus in mid-November, King set the American Conference's single-season record for touchdowns responsible for with 50 and led the nation in points responsible for per game with an average of 27.5. He averaged 332.4 total yards of offense per game last year and was one of only three quarterbacks in FBS history with at least 35 passing touchdowns and 13 rushing touchdowns (36/14). King has caught 59 passes for 504 yards with three touchdowns during his career and returned 10 kickoffs for 254 yards and one touchdown as a freshman.

9. Khalil Tate, QB, Arizona: He has to be healthy and he has to run to stay on this list. Last year, he was a mere afterthought nationally because an ankle injury limited him for most of the year. But when he was moving around in 2017, Tate was a wizard with his legs, becoming the first Pac-12 quarterback to rush for 1,000 yards in a season (1,411). The darting and dicing Tate averaged 128.3 rushing YPG that year and captured the nation with the FBS rushing record for a quarterback with 327 yards against Colorado.

10. D'Andre Swift, RB, Georgia: Despite dealing with nagging injuries and playing in a crowded backfield in 2018, Swift still led the Bulldogs with 1,049 rushing yards and 10 touchdowns. He averaged 6.4 YPC and tied for second in the SEC with 29 touches that were either 12-plus-yard rushes or 20-plus-yard receptions. In two seasons, Swift has registered 899 yards after contactand 40.6% of his 244 rush attempts have gone 5-plus yards.

11. Isaiah Wright, WR, Temple: Wright was third nationally with 873 kickoff return yards last year and had a touchdown of 99 yards that he made look really easy. He also returned 19 punts for 249 yards and two more scores. Wright caught 33 passes for 368 yards and three touchdowns, but his bread and butter was in the return game. He's had 24.2% of his kickoff returns go 30-plus yards, and has five career return touchdowns.

12. Tylan Wallace, WR, Oklahoma State: Wallace was second in the nation last season with 1,491 receiving yards, averaging 17.3 YPC in the process. He had two 200-yard outings last year and 79.1% of his receptions went for either first downs or touchdowns. Twenty-five of his 86 receptions went for 20-plus yards.

13. Grant Delpit, S, LSU: The ultimate ballhawk who can cover an entire defensive backfield or move sideline to sideline, Delpit is a quarterback's nightmare. With a little Honey Badger in him (he's also wearing No. 7 this fall), Delpit is long, rangy and led the SEC with five interceptions, while defending 14 passes last year. He was also very active in the box, registering five sackson the year and recorded a defensive pressure on 27% of his pass-rushing snaps. Delpit also logged 46 solo tackles in 2018.

14. Chase Young, DE, Ohio State: Young could be the No. 1 pick in next year's NFL draft. Nicknamed "The Predator," Young had 14.5 TFLs and 9.5 sacks last year. The sideline-to-sideline defensive end can chase down the fastest running backs and drop back into coverage if needed. He broke up five passes last year and had 71 defensive pressures on the season, getting 14 in the Buckeyes' win over Penn State.

15. Deon Jackson, RB/KR, Duke: Jackson is one of the most fun players you probably haven't heard of. He led the Blue Devils with 847rushing yards, caught 23 passes for 253 yards and had nine total touchdowns. He also returned 23 kickoffs for 502 yards (21.8 per return) and recorded at least 107 all-purpose yards seven times last season, including registering 403 against Pitt. 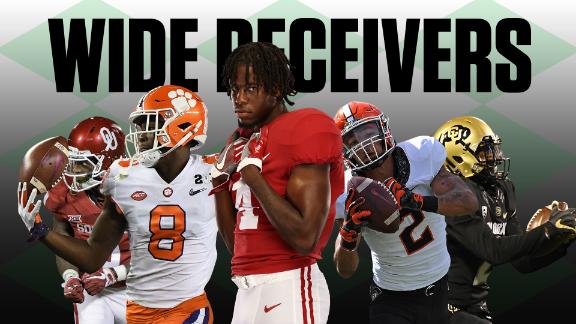 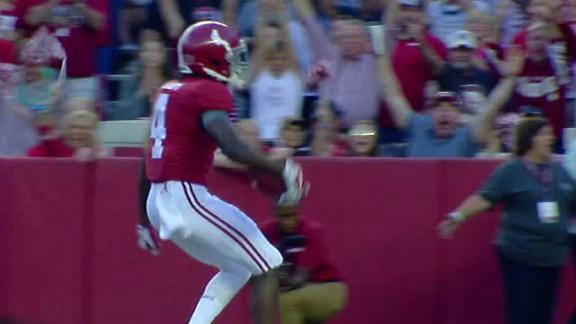 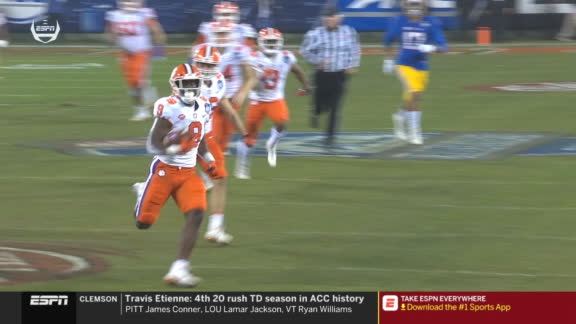 Clemson RB escapes for 75-yard TD on opening play
Clemson strikes on the first play of the game as Travis Etienne avoids Pittsburgh defenders for a 75-yard touchdown. 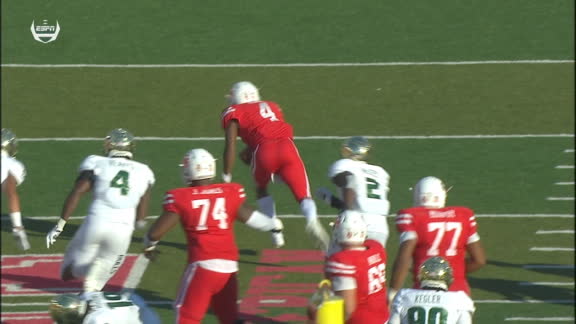 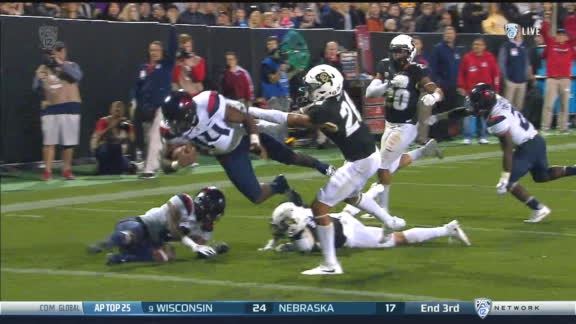 QB Tate outruns entire defense for fourth TD
Arizona's QB Khalil Tate rushes for his fourth TD of the day with a 75-yard scramble to give him 290 rushing yards. 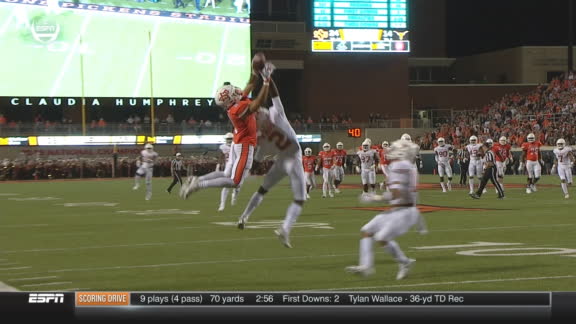 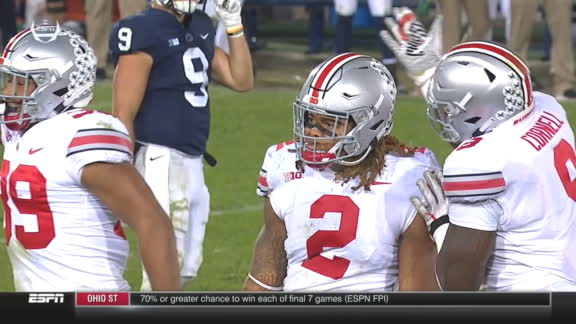