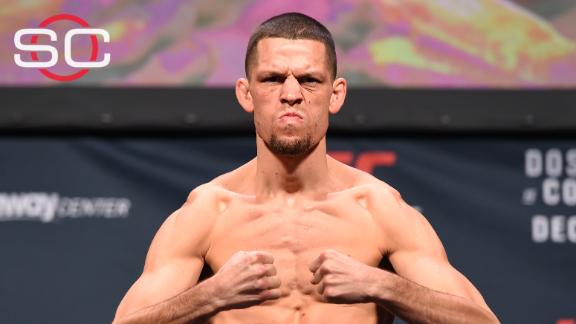 With a lightweight championship fight off the table, Conor McGregor has opted to move up two weight classes and now will meet Nate Diaz in a non-title welterweight fight at UFC 196 on March 5.

UFC president Dana White broke the news on SportsCenter. The fight, which will be contested at 170 pounds, will headline the UFC 196 pay-per-view event scheduled to take place at MGM Grand Garden Arena.

The current 145-pound champion, McGregor (19-2) was originally scheduled to challenge defending 155-pound champion Rafael dos Anjos (25-7) on March 5, but that bout fell through when dos Anjos officially withdrew with a broken footTuesday. He is expected to be sidelined six to eight weeks.

McGregor tweeted that the two-class move for him is not a big deal.

Diaz (18-10), a longtime lightweight, is coming off a decision win against Michael Johnson on Dec. 19. Because the event is less than two weeks away, the two sides agreed to meet at 170 pounds rather than 155 or a catchweight. It will be McGregor's first career appearance at that weight. Diaz is 2-2 as a welterweight.

Fighting out of Dublin, McGregor, 27, won the UFC featherweight championship Dec. 19, when he knocked out longtime king Jose Aldo with a left hook in 13 seconds, the fastest finish in UFC title fight history. McGregor is 7-0 in the UFC with six knockouts.

Had the dos Anjos bout held up, McGregor would have attempted to become the first fighter in UFC history to simultaneously hold titles in multiple weight classes. He had expressed interest in eventually fighting for the promotion's welterweight title as well.

The UFC explored multiple options once dos Anjos fell off. According to White, offers were extended to former lightweight champion Frankie Edgar and Aldo, neither of whom could accept. Edgar is dealing with a groin injury, and Aldo's coach, Andre Pederneiras, told Brazilian news outlets that Aldo wouldn't be ready on such short notice.

White explained on SportsCenter how Diaz ended up with the fight.

"A lot of guys wanted this fight, but we ended up with Nate Diaz. We felt this was the fight to make and the fight the fans wanted to see."

Diaz, of Stockton, California, is a former lightweight title challenger. He fought then-champion Benson Henderson in December 2012, coming up short via unanimous decision.

Women's bantamweight champion Holly Holmwill meetMiesha Tate in the other featured event in UFC 196. It will be Holm's first title defense since her stunning second-round knockout of Ronda Rousey on Nov. 15.