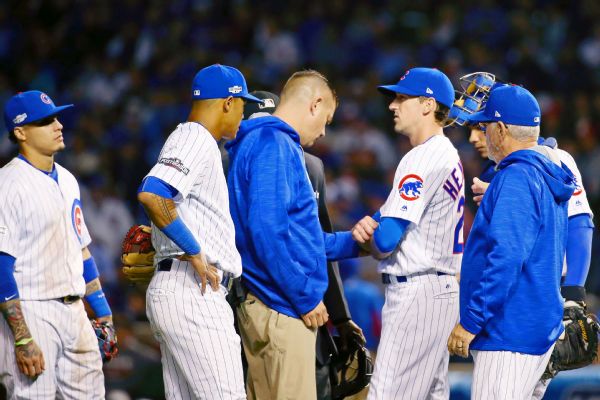 CHICAGO -- Cubs starter Kyle Hendricks left in top of the fourth inning of Chicago's 5-2 win over the San Francisco Giants in the National League Division Series after taking a line drive off his right forearm Saturday night.

The right-hander was evaluated for a forearm contusion, and X-rays were negative for a fracture.

With the Cubs leading 4-2 and no one on base with two outs, Giants outfielder Angel Pagan hit a ball right back at Hendricks, who tried to catch it, but the ball deflected off his arm, allowing Pagan to reach first base.

After Cubs manager Joe Maddon and the team's training staff examined him, Hendricks attempted to throw some warm-up pitches but was not able to continue in the game.

After the game, Hendricks said: "It feels fine now. Hopefully it's a day to day thing."

Hendricks led the majors with a 2.13 ERA and had a two-run single in the second inning of Saturday's game, matching his season total for RBIs.

He then gave up two runs in the third before getting hit with the line drive one inning later. He pitched 3 2/3 innings overall, giving up four hits and two runs.

Lefty Travis Wood, who replaced Hendricks on the mound, homered in the bottom of the fourth to give the Cubs their final run of the evening.