WTVD
By Mark Armstrong
CUMBERLAND COUNTY, N.C. (WTVD) -- Earl "Early Bird" Horan is something of a local celebrity in Hope Mills. He's had newspaper articles written about his athletic exploits and was Gray's Creek High School's Homecoming King this fall so it's not unusual for him to get recognized while out and about. 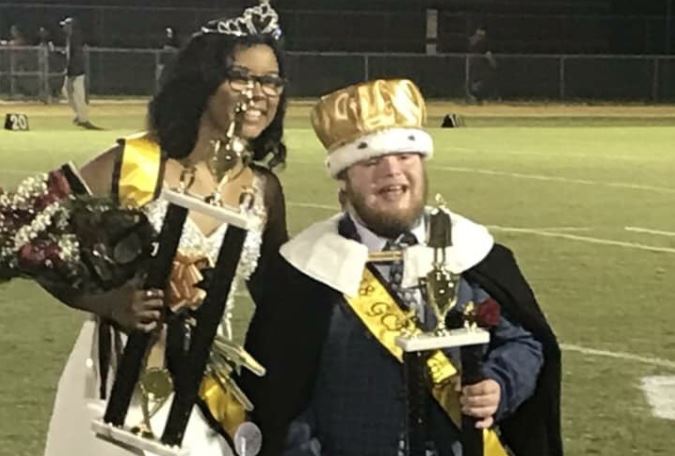 That fame is sure to grow after this story about his match last Wednesday night. It was a dual pitting Gray's Creek vs. Cape Fear. As a three-year letterman on the Bears wrestling team, Horan needed an opponent at 195 pounds and Austin Hunt of Cape Fear volunteered to be that man.

Hunt could've overwhelmed Early Bird. Likewise, he could've rolled over for his exhibition opponent. He chose option three. "I came up with a gameplan to wrestle him all three periods... I didn't want him to just win, I wanted him to earn it."

And so it went, Early Bird and Hunt locked in a struggle of takedowns and escapes, on the mat and upright, but late in the match, Horan found his sweet spot. He sunk in "the half" and rolled Hunt onto his back.

"He was actually pretty strong," said Hunt "I tried fighting back but he kind of overpowered me."

The referee slapped the mat and Early Bird had his favorite thing - a victory by pin. He wasn't the only winner though. Hunt started smiling after rising from the mat and told me on FaceTime Monday that "it made me good inside to give him that opportunity of a lifetime."

For Early Bird's dad Earl, a special needs teacher at Gray's Creek, it meant the world. "It brought tears to my eyes, it was such a beautiful thing...(Early Bird) allows me to see the good in everyone. That young man from Cape Fear, to have that much kindness, compassion, and sportsmanship at that young age? Amazing."