Davante Adams taken out of game with concussion after illegal hit 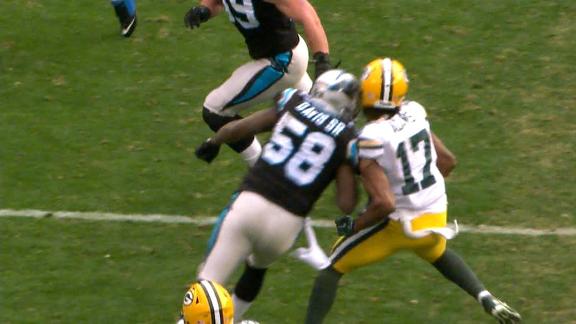 The Green Bay Packerswide receiver was taken out by an illegal hit that led to a concussion for the second time this season.

On Sunday, it happened when Carolina Panthers linebacker Thomas Davis hit Adams with an illegal blindside hit during an interception return in the third quarter. Davis hit a defenseless Adams after Panthers safety Colin Jones picked off an Aaron Rodgers pass and returned it 34 yards.

This is Adams' third concussion in the past two seasons.

He did not miss a game following either of his past two concussions. He was taken off the field on a gurney following Trevathan's hit on Sept. 28. The Bears linebacker served a one-game suspension, but Adams returned for the next game 10 days later and caught two touchdown passes at Dallas.

In Green Bay's 31-24 loss to the Panthers, Adams was able to walk off the field under his own power.

An NFL spokesman said that Davis' hit will be reviewed for potential discipline.

The Packers were not happy about Davis' hit, although Rodgers wouldn't say what he and Davis talked about during an on-field exchange late in the game.

"I'm obviously concerned when he's not out there and he goes in [the locker room]," Rodgers said of Adams. "He had the rough one at home against Chicago, came back in a week. Everybody's brain responds differently to traumatic contact like that. I hope he's able to respond favorably."

Said Packers receiver Randall Cobb: "I was pretty pissed off at first when I saw the replay at how unnecessary it was. But once I saw 'Tae' moving, he was all right and I was happy to see he was able to walk off the field."

Packers coach Mike McCarthy said he would reserve judgement until he sees the play on video but said: "I saw the reaction on our sideline. I know a lot of guys thought it was a dirty hit."

When asked whether a targeting rule would help cut down on hits like that, Packers receiver Jordy Nelson said: "It's not going to stop anything. They've got targeting rules in college, and they still do it. so guys have to take it upon themselves to be smart. That's what they're doing. I mean, it's a game, it's a livelihood. You don't want that."

"Guys are in full control of their bodies there," Nelson added. "You can control that. You know the guy's not looking. I don't know if Davante was even moving. So it's one of those things that we control our bodies at extreme rates all the time, and I think that's something you can control. I know Thomas a little bit. I know he's a great guy, but I also believe he can control that a little bit better than he did there."