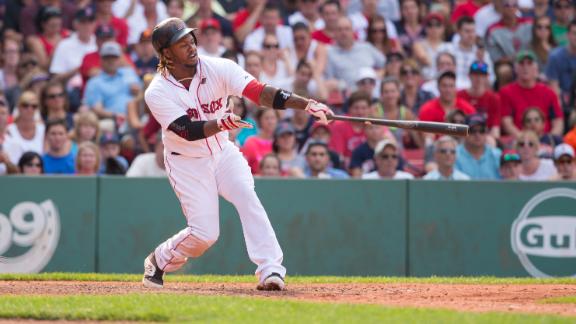 BOSTON -- Red Sox slugger David Ortizstarted at first base in Sunday's 5-4 win over the Houston Astros -- his first start at the position in an American League contest in almost nine years -- for the struggling Mike Napoli.

Ortiz, who played three games at first base earlier this season during interleague action, had not started there against an AL opponent since Aug. 5, 2006. He committed an error that day but had played 40 games at the position since then with just one miscue.

He was error-free again Sunday before being replaced by Napoli in the eighth inning and went 0-for-3 with a walk and a run scored.

It was Ortiz's first start at the position in a game at Fenway Park since July 16, 2005, when the Red Sox hosted the New York Yankees.

"Complete confidence in his ability to play the position," Red Sox manager John Farrell said. "That was part of the conversation in getting him to this point. He's willing to do whatever to give us our best chance to win today.

"Any time David's name comes up, you think DH, and yet every game that we've seen him play first base he plays it freely and plays it naturally. Expect that to take place today."

Ortiz has been platooned at first when the Red Sox face right-handers in interleague games. He also started on Opening Day in Philadelphia against left-handerCole Hamelsthis season.

Taking Napoli's bat out of the lineup was part of the mission to field the best team. Napoli was 0-for-9 with four strikeouts in the series against the Astros. His average is down to .192, and he has one home run in his last 29 games.

"He's obviously in a stretch right now where he's grinding through some things. You see him work counts, you're seeing him go early in counts, the hard contact has been inconsistent," Farrell said. "I think there's been times where he's looked for a certain pitch in a count and not gotten it, and it has resulted in a located pitch by a pitcher.

"He fully recognizes where he's at and continues to work at getting this thing turned around, but [I] felt like today was a day to get him a little bit of a breather."

Farrell would not rule out using this arrangement going forward.