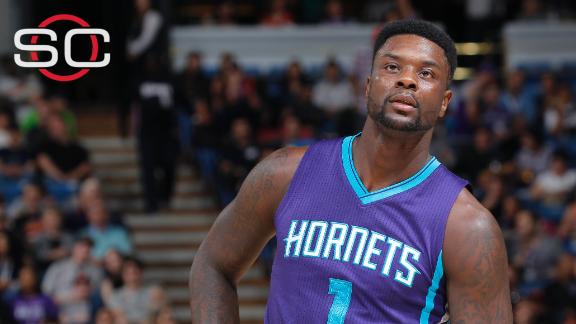 The deal being discussed has the Clippers sending forwards Matt Barnes and Spencer Hawes to Charlotte for Stephenson, who signed a three-year, $27 million deal with the Hornets last summer.

The contract, however, includes a team option for the final year so the Clippers would only be on the hook for this upcoming season if Stephenson doesn't pan out.

A source told ESPN the deal is "on the table."

"It's close but not definite," the source said.

The Hornets are expecting an answer within the next two days, the sources said.

While the trade is not imminent it is also not the first time the two sides have talked about such a deal.

A similar deal was proposed last season before the trade deadline but fell apart, sources said.

The proposed trade was earlier reported by Yahoo! Sports.

The Clippers have been trying to upgrade at the wing for years and since they are essentially at the cap now, the only way to significantly upgrade the position is through a trade.

While Stephenson, 24, struggled in his first season with the Hornets, averaging 8.2 points, 4.5 rebounds and 3.2 assists while starting just 25 of the 61 games he played, the Clippers believe he can regain the form he had in Indiana if he came to Los Angeles.

Stephenson averaged 13.8 points, 7.2 rebounds and 4.6 assists while starting 78 games two years ago for an Indiana Pacers team that won 56 games and advanced to the Eastern Conference finals.

The Pacers made Stephenson a five-year, $44 million contract offer after the season but Stephenson, who led the league in triple-doubles with five, felt the offer undervalued him before turning it down and signing with Charlotte.

While a change of scenery might help Stephenson, the Hornets may be hoping the same is true for Hawes, who signed a four-year, $23 million deal with the Clippers last summer.

Hawes struggled through his worst season since his rookie year, averaging 5.8 points, 3.5 rebounds and 1.2 assists for the Clippers last season.

Hawes, 27, was buried at the end of the bench during the playoffs where he was held out of half of the Clippers' 14 postseason games and played more than 10 minutes just twice, both coming in blowouts.

Getting out from under his contract and starting with a clean slate after next season could be incentive enough for the Clippers to make the deal.

Barnes, 35, is in the final year of his contract and will make $3.5 million this upcoming season. He averaged 10.1 points, 4.0 rebounds and 1.1 assists while starting 74 games last season.

Barnes' on-court temper and penchant for getting fined, however, constantly irked head coach and president of basketball operations Doc Rivers, who has been looking to deal Barnes for about two years.

Information from ESPN's Chris Broussard was used in this report.