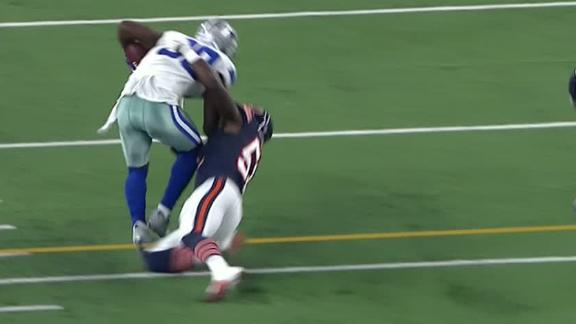 ARLINGTON, Texas -- Dez Bryant sprained his right knee early in the first quarter Sunday night, but he stayed in the game and caught three passes for 40 yards and a touchdown in the Cowboys' 31-17 win over the Chicago Bears at AT&T Stadium.

Owner Jerry Jones said Bryant will have an MRI on Monday.

"We feel OK," Jones said. "We're going to do some other things, too. But right here, yes. Right now, we're fine. We'll give it another look-see with the MRI."

Bryant suffered the injury on the game's second play, when he caught a hitch, broke a tackle and linebacker Christian Jones dragged him down after an 11-yard gain. As he tumbled out of bounds, Bryant landed awkwardly, his legs going in different directions.

He sat on the turf for a moment, then jogged across the field. About 10 yards from the Cowboys' sideline, Bryant dropped to his knees and the Cowboys' training staff attended to him.

Bryant returned after a few plays.

"I saw how the knee took it. That was a little concerning," Jones said. "I did see him moving around, but I saw Michael Irvin -- I'll never forget that -- go back out and play [after an ACL injury]. Let's just see how the MRI goes. We've got what we've seen in here, and that's not something I would be alarmed about."

When the Cowboys were on defense, Bryant spent some time riding an exercise bike on the sideline. The Cowboys led 24-10 in the fourth quarter, when Bryant caught a slant in stride, broke a tackle and lunged into the end zone as the Cowboys took a 21-point lead with 9:02 left in the game.

Bryant made a brief appearance in the locker room, grabbing his clothes, a pair of retro Jordans, and a fistful of diamond-and-gold jewelry.

About 45 minutes later, a club spokesman announced he wouldn't be available.

Bryant missed seven games last season. He missed five with a broken right foot early in the season, and the Cowboys shut him down for the last two weeks to avoid further injury.

He had surgery on the foot in the offseason.