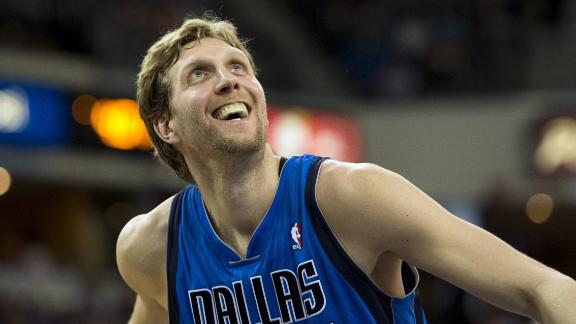 SALT LAKE CITY -- Dirk Nowitkzi has bumped the "Big O" out of the top 10 on the NBA's all-time scoring list.

Nowitzki became the 10th-leading scorer in NBA history with a 21-point performance on 9-of-11 shooting in the Dallas Mavericks' win Tuesday night against the Utah Jazz, giving him 26,714 points in his career. Nowitzki passed Oscar Robertson, who finished his Hall of Fame career with 26,710 points, when he swished a midrange jumper on the Mavs' first possession of the fourth quarter.

"It's definitely surreal, passing the Big O and only nine guys ever in this league scored more than me," said Nowitzki, who has averaged 22.5 points per game and made 12 All-Star appearances during his career. "That's crazy to think. From where I came from, a little dump in Wurzburg, Germany, it's been an amazing ride. Hopefully I can have a couple more good years and see where I end up."

Nowitzki, a 16-year veteran who has played his entire career with the Mavericks, has passed Jerry West, Kevin Garnett, Reggie Miller, Alex English and John Havlicek this season.

"This is my 30th year in the NBA and one of the few times I've truly been in awe of an accomplishment," Mavs coach Rick Carlisle said. "A top-10 all-time scorer is an unbelievable accomplishment because it's a level of excellence that's beyond belief and it's being able to do it over an extended period of time with consistency.

"One of the really unique accomplishments, and he's going to keep eating up more people. He's got a long way to go."

Nowitzki, who has vowed to re-sign with the Mavs when his contract expires this summer, projects to move up to seventh on the all-time scoring list next season, passing Hakeem Olajuwon, Elvin Hayes and Moses Malone. Nowitzki probably would pass Shaquille O'Neal in 2015-16 and could become the sixth player in the 30,000-point club in 2016-17, if he decides to continue his career that long.

After a rough rookie season as a 20-year-old during the lockout-compressed 1999 campaign, Nowitzki emerged as the sweetest-shooting 7-footer in NBA history. He has consistently added elements to his game over the course of his career, developing off-the-dribble moves and a low-post attack to complement his perimeter touch.

Nowitzki's one-legged fadeaway, a virtually unblockable shot mimicked by fellow superstars such as Kobe Bryant, LeBron James and Kevin Durant, has become his go-to move during the later years of his legendary career.

Nowitzki has averaged at least 21 points per game in 13 of the past 14 seasons. The exception was last season, when he missed the first 27 games after undergoing arthroscopic knee surgery and struggled to find his rhythm after returning. He has responded by averaging an efficient 21.6 points per game this season, returning to the All-Star Game, putting the Mavs in position to return to the playoffs and hitting a major milestone.

"Like I always say, this stuff means more to me once my career is over, but this is a sweet one," Nowitzki said. "Top 10 is definitely unbelievable."

Mavs Cruise Past Jazz
Dirk Nowitzki scored 21 points in the Mavericks' 95-83 win over the Jazz to pass Oscar Robertson for 10th on the all-time scoring list.