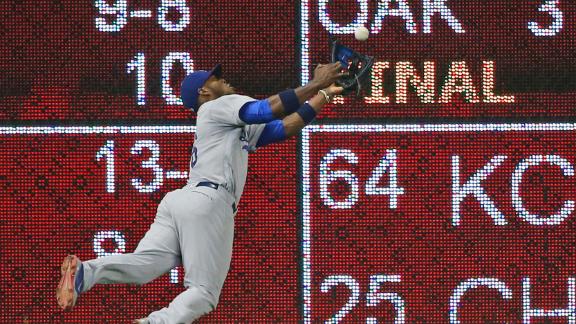 Yasiel Puig has met with theLos Angeles Dodgers fan whose front tooth was knocked out when the outfielder tossed a ball into the stands at Yankee Stadium as a souvenir.

Alyssa Gerharter also came away with a busted lip from Puig's throw, which followed the final out of a Dodgers win Monday night in the opener of a three-game set in the Bronx.

Puig made amends withGerharter and tweeted a photo of the meeting Wednesday.

Gerharter described part of the sequence of events in a statement to the New York Daily News.

"It wasn't so much painful as it was shock," she added. "So I felt it hit me and I could feel immediately with my tongue there's a hole. And I looked down at my hand and saw there's a tooth in my hand."

Gerharter was taken to a hospital after being ushered to a first-aid room inside the stadium, according to the Daily News report.

"Everybody was going after it. And I guess we all missed," said Gerharter, who said she was in attendance with a group of 30 or 40 New York-based Dodgers fans. "It was so fast that I don't think it's anybody's fault for not catching it."

"In our whole group there was only one person who had a glove," Gerharter told the Daily News. "So everybody was trying to catch it with their bare hands. I caught it with my face."