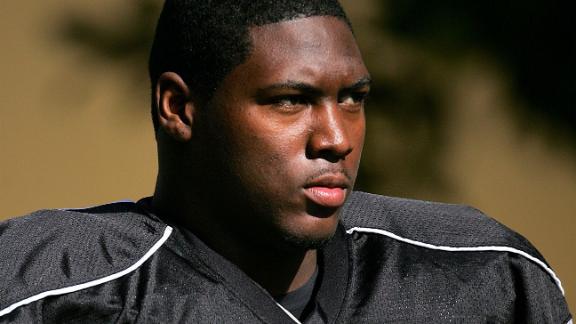 Alabama defensive lineman Jonathan Taylor, who was dismissed from the Georgia football team last year after being arrested on a charge of felony aggravated assault and family violence, has been arrested again on domestic violence charges in Tuscaloosa, Alabama.

According to an incident report, police officers responded to a call near Alabama's campus to speak with a victim who told police she was assaulted by her boyfriend at approximately 6 p.m. on Saturday.

After speaking to the victim about an altercation that took place at her residence, officers located the suspect at the victim's residence and spoke to him about the incident. Officers found probable cause to arrest the suspect.

The 24-year-old victim had minor injuries to her neck from the assault, according to the police report. The officer also noted in the report damage to a bedroom closet door with a hole punched in it.

Taylor was held on $1,000 bond and placed on a mandatory 12-hour domestic violence hold.

Deborah Lane, associate vice president for university relations, released a statement Sunday morning saying: "UA is aware of the incident. The student has been referred to Judicial Affairs."

Alabama coach Nick Saban and athletic director Bill Battle both said Taylor warranted a second chance when he signed in January as part of the Crimson Tide's 2015 signing class. On signing day, Saban called it a "university decision" and said it was determined "that he was the kind of guy that deserved a second chance."

"I know the sensitivity of the issue and we're going to do what we can to help this young man have success here,'' Saban said.

Taylor was booted from the Georgia football team last July after police said he struck his girlfriend with a closed fist and choked her during an argument at Taylor's dormitory room. That case is still pending.

He also was one of four Georgia players arrested last March for theft by deception after they were caught trying to double-cash meal reimbursement checks.

His signing with Alabama created a stir nationally, and the university issued a statement that read: "Jonathan Taylor was admitted to The University of Alabama following the same procedures that the UA Admissions office uses to evaluate any student who has dealt with legal issues. The admissions process includes representatives from academic, legal, student affairs, student conduct, UAPD and counseling. Athletics is not involved in the admissions process. Taylor's continued enrollment depends on his ability to fulfill all requirements the university has specifically mandated for him during his time as a UA student."

Taylor's attorney, Kim Stephens, told ESPN.com in January that other schools inquired about recruiting Taylor after his troubles at Georgia, and sources confirmed to ESPN.com that schools in the SEC and ACC were pursuing him.

"There are a lot of other schools that were recruiting him and would have admitted him," Stephens said.

Taylor's arrest came just hours after Alabama defensive back Geno Smith was arrested and charged with driving under the influence early Saturday morning, according to the Tuscaloosa County Sheriff's Office website.