Dutch drubbing 'a punch to the face' 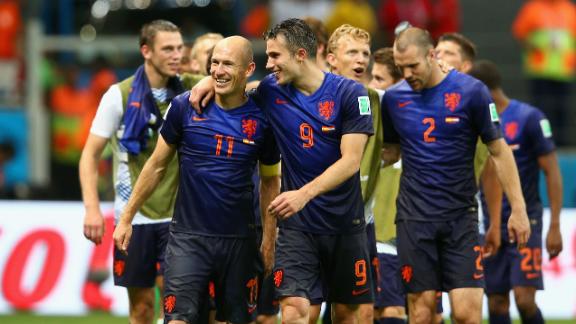 The Spanish press were trying their best to be optimistic -- and almost managing it -- after Spain were walloped 5-1 by Netherlands in their opening Group B opening game in Salvador.

- MARCA (@marca) June 13, 2014The paper said the remaining two group games, against Chile and Australia, were "two finals to show the talent and football that made us champions. We believe."

Inside, the main match report was headlined "Global Humiliation", while another reaction piece went under the banner "A Historic Defeat".

"Never in history has a defending champion been punished so in a World Cup finals," it said. "Never. A team with a star never took such a punch to the face. Netherlands' revenge for the last final was so tough for us. The hammering at the Arena Fonte Nova has a place in the blackest moments in the history of the Spain team."

Much of the focus post-game was on La Roja captain Iker Casillas, who was at fault for the third and -- especially -- the fourth Netherlands goals. Juanma Trueba's match report in AS, headlined "The worst nightmare of the champion," acknowledged his errors but put the scale of the defeat down to a more general bad reaction to going unexpectedly behind.

"If you want, you can torture yourself watching again the Casillas mistake for Netherlands' fourth goal," Trueba wrote. "His mistake symbolises the collapse. The player who protected us for six years left us in the open.

"But we did not lose because of Iker. We lost as we had to lose. The scoreline is another story. First we slipped in the dark, and then we did ourselves unnecessary damage trying to switch on the light. We stumbled over all the sharp furniture."

In El Pais, former Spain midfielder and current Olimpiakos coach Michel said he knew the team would face plenty of criticism but he still believed they could turn things around.

"The future has got complicated because we have Chile to come, and an air of bewilderment that now they all will try to overcome," he wrote.

"We could be pessimistic, but it is time to recover from the shock and prepare for what is coming: harsh criticism and storm clouds. Some will say: we saw this coming. Kids, it's time to stand up to the war-drums. I still believe in you."

Reaction in the Netherlands media was of stunned delight, with De Telegraaf headlining its report "Oranje slaughters Spain" and saying: 'For a moment, the trauma of 2010 is forgotten." The paper crowed: "Flying start -- amazing revenge on Spain."

It added: "Casillas' toe will probably haunt Robben for the rest of his life. It's the pain that will never go away, because it cost Oranje the world title. But on Friday, the 30-year old attacker from Bedum took a little a bit of revenge for his much-talked about miss."

Former Netherlands player Willem van Hanegem wrote in the paper: "The Dutch national team made me so happy" and hailed Van Persie's magnificent headed equaliser as "one of the most beautiful goals he has ever scored."

Football writer Charles Bromet said in De Volkskrant: "The world is upside down, and this reversed world looks mightily beautiful."

Dutch Delight
FC's Craig Burley applauds the Dutch for taking advantage of their chances but says there is still work to be done.

Spain on the demise?
The ESPN FC panel weigh in on how Netherlands turned the tables on Spain.