Fedor Emelianenko's return on hold after Matt Mitrione pulls out 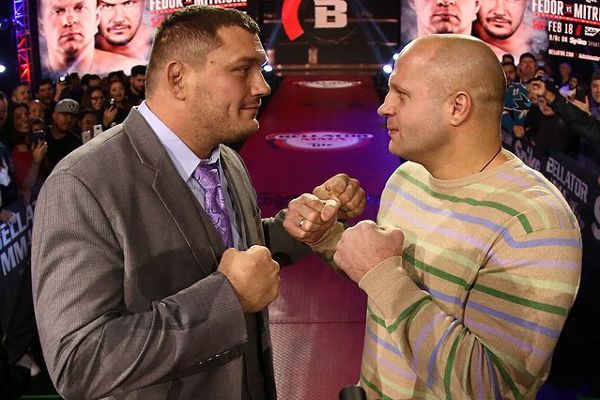 A heavyweight bout between Fedor Emelianenko and Matt Mitrione was canceled Saturday, just hours before the Bellator MMA event their bout was scheduled to headline at SAP Center in San Jose.

On the Bellator 172 broadcast, it was reported that Mitrione could not compete because he was suffering from kidney stones.

"This morning [Mitrione] was in excruciating pain,'' Bellator president Scott Coker said. "We're not going to put Matt in any kind of situation where he's in harm's way."

Multiple sources told ESPN that Bellator explored several options to replace Mitrione and keep Emelianenko in the main event.Chael Sonnen, who suffered a first-round submission loss to Tito Ortiz at Bellator 170 on Jan. 21, told ESPN that he had offered to fight Emelianenko on several hours' notice.

Those options ultimately fell short, however, and Emelianenko, who was supposed to fight in the U.S. for the first time since 2011, was pulled from the card entirely.

"We just ran out of time," Coker told ESPN in a text message. "No one could have predicted Matt would get sick."

In the fight that was elevated to the main event, Patricky "Pitbull" Freire (17-8) knocked out Josh Thomson (22-9) in the second round of their lightweight bout.

Bellator did have two potential heavyweight replacements for Mitrione in Cheick Kongo and Oli Thompson, who were scheduled to fight each other on the main card. That bout went on as planned, however, with Kongo winning by unanimous decision.

Instead of fighting, Emelianenko worked the corner for Anatoly Tokov, who beat Francisco France on the undercard. Tokov is a member of Emelianenko's team.

Afterward, Emelianenko spoke to the crowd from the ring through an interpreter and expressed his disappointment.

"We were preparing for this fight really very hard," Emelianenko said.

Bellator officials said the Emelianenko-Mitrione contest will be rebooked at a later date. A source told ESPN that Coker's goal is to take the fight back to San Jose in May or June.

"We just have to wait and see if Matt is going to be OK to do it," Coker said. "If not, we'll find Fedor another opponent."

Emelianenko, 40, is widely considered one of the greatest fighters of all time. He retired in 2012, but returned to active competition in 2015. He is 2-0 since coming out of retirement. Saturday's bout would have marked Emelianenko's Bellator debut.

A former UFC veteran, Mitrione (11-5) specifically asked the promotion to schedule a fight with Emelianenko (36-4). Mitrione appeared fine during interviews this week and successfully made weight on Friday, at 257.5 pounds.

"It's disappointing," Coker said. "We all came here to see Fedor fight in the main event. I feel bad for him because the guy's in tip-top shape, ready to go, ready to fight, came here to fight, and there's no fight."