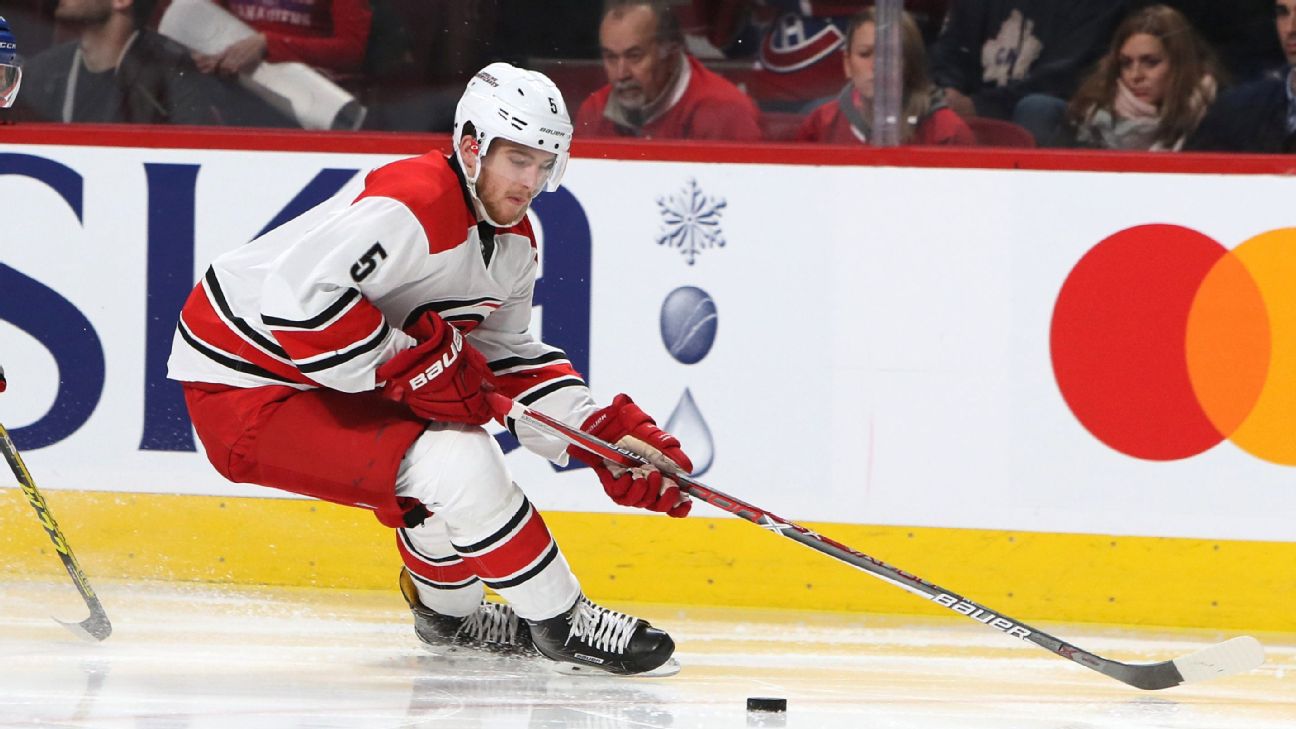 DALLAS -- After a quiet first round to the NHL draft, business picked up Saturday, thanks to the Carolina Hurricanes and Calgary Flames.

An extra layer of intrigue in this trade: Bill Peters was hired by the Flames as head coach after opting out of his contract with the Hurricanes after the season. So he knows Hanifin and Lindholm quite well.

This is the second time in three years that Hamilton, 25, has been traded at the NHL draft. He was acquired by the Flames from the Boston Bruins in 2015 for three draft picks. In 245 games with Calgary, Hamilton had 42 goals and 95 assists.

He skated all 82 games last season, averaging 21:32 in ice time. The issues with Hamilton, for Calgary, however, is his $5.75 million cap hit through 2021 and a modified no-trade clause that kicks in after the upcoming season.

Fox was drafted by Calgary in the third round with the 66th overall pick in 2016. He's considered a blue-chip defenseman, but also a flight risk as he's committed to playing a third year with Harvard and could become a free agent if he plays another season beyond that.

The Flames were clearly unsure about Fox's future with the club; the Hurricanes clearly are more optimistic.

Ferland, 26, has 42 goals and 47 assists in 250 games for the Flames as a depth forward. He can play both wings and makes $1.75 million this season before going unrestricted next summer.

For the Flames, Hanifin is a 21-year-old defenseman who had 32 points in 79 games last season. He's an agile skater and a strong puck mover, but many of his flaws defensively were covered up by partner Jaccob Slavin.

For Carolina GM Don Waddell, the trade comes after a frustrating first day of inactivity in Dallas.

"We got so many conversations going on. I've probably had more conversations here than I have in 15 previous drafts," Waddell said. "It seems like people are coveting their draft picks a lot more than they maybe used to, because it's the salary cap era and we all need young players to move forward. So I think there will be an opportunity to do something."
Report a correction or typo
Related topics:
sportsespnelias lindholmtradenoah hanifinnhlnhl draftcarolina hurricanesmicheal ferlandbill petersjaccob slavindougie hamiltoncalgary flames
Copyright © 2020 ESPN Internet Ventures. All rights reserved.
More Videos
From CNN Newsource affiliates
TOP STORIES