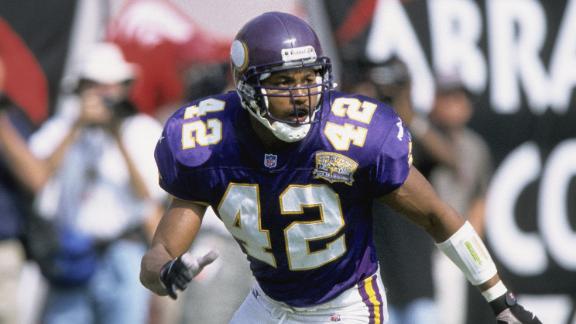 Former Minnesota Vikings safety Orlando Thomas, who led the NFL in interceptions during his rookie season in 1995 with nine, died Sunday night of ALS. He was 42.

"Nobody's ever fought a battle like Orlando fought, with so much dignity -- I never saw anything like it," Bartelstein said Monday morning. "It's just incredible. He never had a sense of self pity, never felt sorry for himself, he was always worried about everyone else. He was just the most incredible person I've ever been around."

When Thomas played for the Vikings from 1995 through 2001, he weighed 225 pounds. When Thomas died, he was down almost 70 pounds, Bartelstein said.

Some of Thomas' former Vikings teammates took to Twitter to remember him, including wide receivers Randy Moss and Jake Reed.

Thomas started 87 of the 98 games he played for the Vikings, intercepting 22 passes, before retiring after the 2001 season.

He revealed in June 2007 that he was suffering from ALS.

The Vikings said in a statement that they were "deeply saddened."

"Orlando was an outstanding player for the Vikings for seven years, but more importantly, he represented the franchise and the state of Minnesota with the utmost dignity and class. While his outgoing personality made him a favorite among his teammates, Orlando's involvement in the community made him a favorite outside of Winter Park.

"Since 2007, Orlando fought this disease with tenacity and optimism. Throughout his difficult battle, he refused to allow ALS to define him, instead putting others' needs in front of his and focusing on making those around him smile. Orlando will always remain a member of the Minnesota Vikings family."