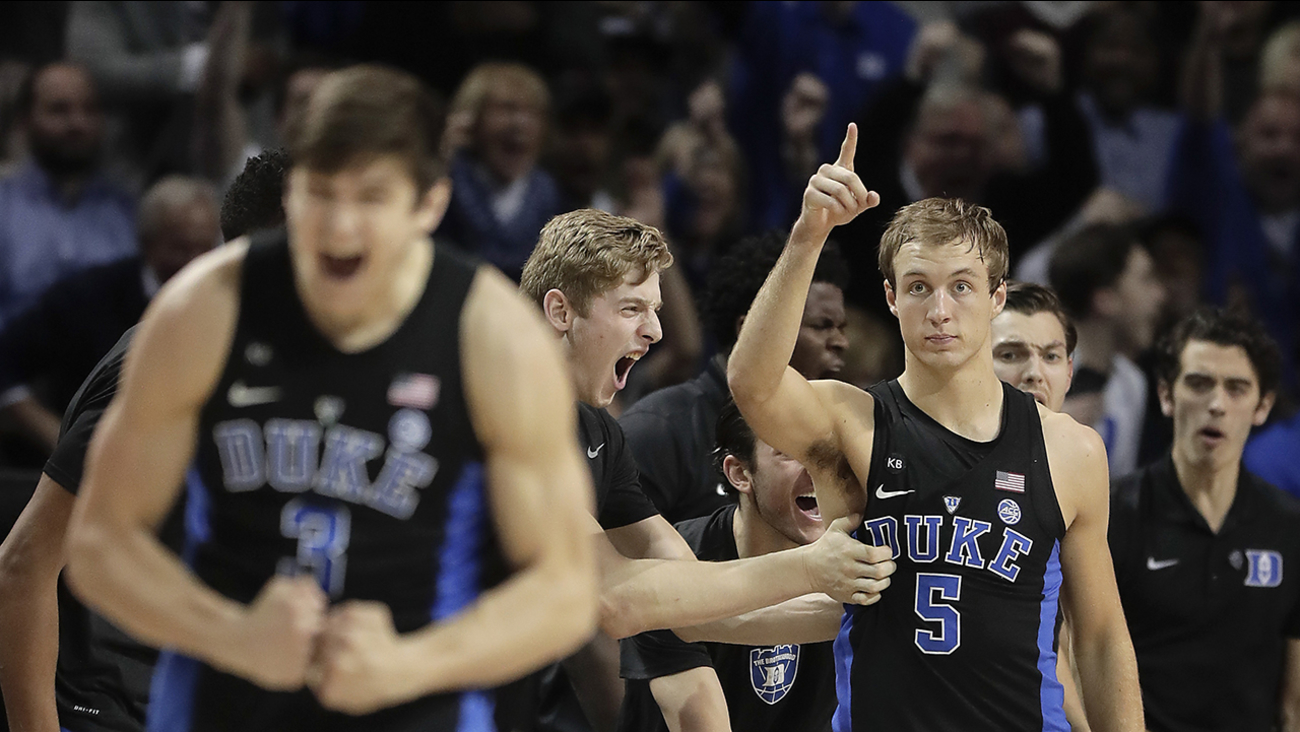 Grayson Allen, foreground, and Luke Kennard are pumped as the Blue Devils seize the momentum down the stretch against UNC on Friday night. (Julie Jacobson)

BROOKLYN, New York (WTVD) -- Just like it did against Louisville, Duke put on a furious rally to win an ACC Tournament game. This time it had to feel even sweeter.

The No. 14 Blue Devils used a lightning-fast surge in the second half to stun rival No. 6 North Carolina 93-83 and secure a spot in the ACC championship game.

By winning the second game between the teams in seven days, fifth-seeded Duke took two of three in the season series against the top-seeded Tar Heels (27-7).

It was their first ACC Tournament matchup since the Blue Devils won the 2011 championship game.

Duke freshman Harry Giles contributed seven rebounds and four blocks off the bench in the ACC Tournament win against the Tar Heels.

Duke improved to 13-8 against UNC at the ACC Tournament and 98-44 in the event overall, breaking a tie with the Tar Heels for the best record in the tournament's 64-year history.

"It's like night and day from the one stretch when we were 1-4," said Tatum, a freshman forward averaging 23 points in three ACC Tournament games. "We're clicking at the right time."

Grayson Allen again provided a lift off the bench for Duke, hitting 5-of-6 3-pointers. Allen finished with 18 points.

UNC built a seven-point halftime lead on dominant inside play, but couldn't hold on.

"It was a big-time game for a while, and then it got so it was not a big-time game," North Carolina coach Roy Williams said. "I think the most-disciplined, the best-coached team, the most-focused team is the one that won the game tonight. I didn't do as good a job as Mike did."

Kennedy Meeks led the Tar Heels with 19 points and 12 rebounds, but increasingly became a non-factor as the game wore on.

The rubber match this year was settled on the streets of New York City rather than Tobacco Road, roughly 500 miles from the Dean Dome and Cameron Indoor Stadium as the ACC took its postseason showcase to the Big Apple for the first time.

Regardless of the locale, this edition of the storied rivalry had many of the usual elements - complete with players and roaring blue-clad fans from both teams taking issue with the officiating.

Perhaps the primary missing staple was a tense finish after Duke outscored defending champion North Carolina by 15 points during a 10-minute span while Berry was on the bench with four fouls.

Joel Berry II, who lit up Duke in the regular season finale, never got going. He finished with 10 points and just two assists while picking up four fouls.

Berry, the tournament MVP a year ago, scored 28 points in a win over Duke last weekend.

The decisive spurt put the Blue Devils ahead 77-70 after Allen hit Harry Giles for an alley-oop slam with 5:30 left, and they cruised home from there.

The taller, deeper and more experienced Tar Heels dominated inside early but blew a 13-point lead in the second half. They squandered a chance to tie Duke for the most ACC Tournament titles.

But showing some impressive stamina, Duke won its third game in three days against a conference rival with a winning record. No team has won four games in four days at the ACC Tournament.

"Our guys are in really good shape. I was actually amazed today because Carolina really comes at you," Krzyzewski said. "So it could have worn us out, and it didn't."

Freshman guard Frank Jackson added 15 points for Duke, which quickly climbed out of a 12-point hole in the second half of Thursday's quarterfinal win over No. 10 Louisville.

Back home where the schools are separated by about 10 miles, they split two intense games over the past month - with each program winning on its own court. North Carolina beat the Blue Devils 90-83 last Saturday in the regular-season finale.

Their latest tussle took place on one of the busiest blocks in Brooklyn. And no doubt, the opportunity to showcase college basketball's best rivalry in the nation's largest media market was exactly the dream scenario the ACC envisioned when it moved its postseason tournament north this year - a touchy topic down south that boiled up again this week.

So when Duke and Carolina both won Thursday, it brought a true taste of Tobacco Road to the home of Nathan's Famous hot dogs, smack in the middle of the bustling borough that hosted baseball's most passionate regional rivalries once upon a time: Giants-Dodgers; Yankees-Dodgers.

It was the fifth time the teams played outside the state of North Carolina - three at the ACC Tournament in Atlanta, plus a Tar Heels victory in the 1971 NIT semifinals at Madison Square Garden.

Both schools are loaded with area alumni, though, and the Barclays Center stands were bathed in both shades of blue after a snowy morning in New York, where the Empire State Building was lit in ACC school colors at sunset.

The Blue Devils will try to win a record 20th ACC championship on Saturday night in Brooklyn against No. 22 Notre Dame, which knocked off No. 16 Florida State 77-73. Duke won 84-74 at Notre Dame in their only regular-season meeting on Jan. 30.

Notre Dame has eliminated Duke from the tournament each of the past two seasons, including a semifinal victory in 2015 on the way to the Irish's first ACC championship.

"I don't know if we're even close to being the team we're capable of being, but we're finding something about ourselves and it's something good," Duke senior Amile Jefferson said.