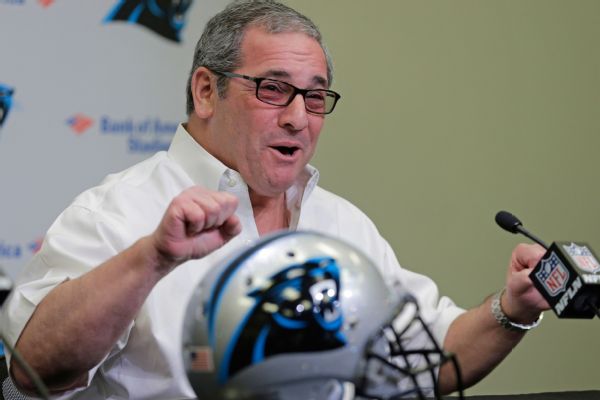 Gettleman has ties to the Giants, where he spent 15 years in their personnel department before joining the Panthers as general manager.

He becomes the second candidate to officially interview for the position, which was left vacant when the Giants fired Jerry Reese and coach Ben McAdoo two weeks ago.

The Giants (2-12) will interview ESPN analyst Louis Riddick for the job Thursday, according to ESPN and multiple reports. Interim general manager Kevin Abrams also is expected to talk with the team about the position in the coming days.

Gettleman, 66, met Wednesday with co-owners John Mara and Steve Tisch and former general manager Ernie Accorsi, who is serving as a consultant in the search. Gettleman worked under Accorsi and the two are known to have a close relationship.

Accorsi also was a consultant in the Panthers' general manager search in 2013.

Gettleman is considered a favorite to land the GM job, according to a source within the Giants organization.

The longtime NFL executive does have a track record of success. With Gettleman serving as general manager, the Panthers went 40-23-1 from 2013 to 2016 --winning three consecutive NFC South titles and reaching the Super Bowl in 2015 after finishing with an NFL-best 15-1 record.

Gettleman was surprisingly fired earlier this year by the Panthers, partly for his hard-line approach in contract negotiations.

The Giants have tough decisions on the horizon after a woeful season that saw just about everything go wrong. Quarterback Eli Manning was benched during the season and his future has been a topic of conversation. Star wide receiver Odell Beckham Jr. is also in search of a new contract and coming off a broken ankle.

There likely wasn't a need for any introductions when Gettleman met with the Giants' brass Wednesday.

Gettleman originally joined the Giants in 1998, when Accorsi was in his first year as general manager. He worked in pro personnel and was promoted to pro personnel director the following year. He stayed in that position for 12 seasons before serving as senior pro personnel analyst in his final season with the team in 2012.