GM: Jets like Ryan Fitzpatrick, but need to find 'middle ground' in talks 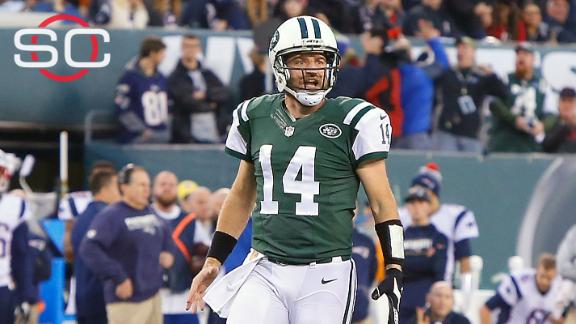 "We like Ryan -- we'd like to have Ryan back -- but at the end of the day, it's free agency," Maccagnan told reporters on a conference call. "You go through it. At some point in time, hopefully, we can find a middle ground we're both happy with."

The Jets have offered Fitzpatrick between $7 million and $8 million per year, sources said. Fitzpatrick is thought to be seeking twice that amount. Obviously, a lot depends on the guarantee and the structure of the contract, so there appears to be flexibility for both sides.

But they remain far apart with very little, if any, talking going on.

Maccagnan chose his words carefully, refusing to issue an ultimatum and declining to reveal his contingency plan at quarterback. For the first time, though, he mentioned former starter Geno Smith as a fallback option, saying "he could definitely be a possibility in that role" -- meaning the No. 1.

The second-year general manager, commenting for the first time on Robert Griffin III's recent free-agent visit to One Jets Drive, described the visit as "a meet-and-greet."

Maccagnan said the organization was simply performing due diligence, reiterating that "our focus primarily is to get something worked out with Ryan."

Fitzpatrick, who replaced Smith (broken jaw) in training camp, led the Jets to a 10-6 record and set the franchise mark with 31 touchdown passes. He imploded in the final game, throwing three interceptions and costing the Jets a playoff spot. The team, also concerned about his age (33), doesn't want to commit big dollars.

Right now, Fitzpatrick has yet to generate much interest on the open market. The Denver Broncos reached out, but they're reportedly unwilling to exceed the Jets' offer.

So the impasse continues.

"We feel we have a very good situation for Ryan here," Maccagnan said. "He's a very good fit for us. Our goal eventually is to get Ryan under contract and go forward with that."

The futures of defensive end Muhammad Wilkerson and left tackle D'Brickashaw Ferguson, 32, have also become hot issues. Ferguson, a 10-year starter, could be on shaky ground because of a $14 million cap charge. He could be asked to take a significant pay cut.

"Right now, I'd say he will be on our roster going forward, but we'll see how this thing unfolds," said Maccagnan, stopping short of a commitment.

Wilkerson has the franchise tag ($15.7 million), but he has been the subject of trade speculation. The Jets, pinched against the salary cap, could certainly use the cap relief. Maccagnan didn't rule out a trade.

"It's not something we're actively pursuing," he said. "We'll see how it plays out."