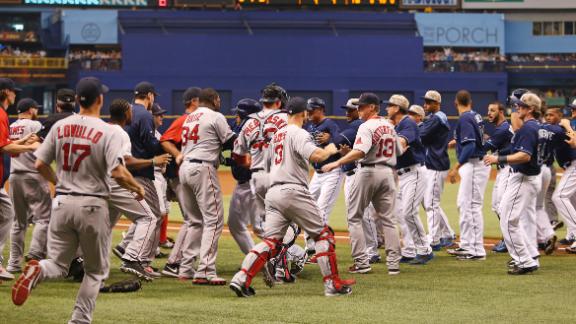 ATLANTA -- Boston Red Sox general manager Ben Cherington, in a move reminiscent of predecessor Theo Epstein from 10 years ago, parachuted into town Monday with the club looking to break a 10-game losing streak.

"We know we have the core of a winning team here," Cherington said. "And we're going to win."

Epstein showed up in Atlanta on a Fourth of July weekend 10 years ago, when the Red Sox also were in a downward spiral.

Cherington, who said he met with manager John Farrell and his staff and also spoke with some players before addressing reporters Monday morning, acknowledged that if the team doesn't play better with the current roster, the club will look at other ways to improve.

"At some point, if the production is not there, we have to think about changes," he told reporters during his session in the dugout. "There's nothing to announce, nothing specific we're looking at. But we're deep enough into the season, we know our limitations, we know where we have to get better, and we'll look at every avenue to get better."

"It's a little bit early to think about trades," Cherington said. "Teams are not in that mindset quite yet. But this is usually the point in the season where teams know what they are, what their limitations are, but they're not necessarily jumping out to make trades.

"Our focus is to help the guys here get better, perform better and think of different ways to align the roster to give John and the staff the best matchups possible."

Among the areas that drew Cherington's attention were the leadoff spot in the batting order, outfielders Jackie Bradley Jr. and Grady Sizemore and struggling starter Clay Buchholz, who is "adamant" that he is healthy.

Still, Cherington noted that although some areas draw more attention than others, the team's losing is a result of underperforming across the board. Getting players healthy -- Shane Victorino, Mike Napoli, Will Middlebrooks and Felix Doubront are all on the DL -- will help, he said.

"I don't think we're excelling at any one area," Cherington said. "We have players capable of excelling. Some of that is going to happen naturally. Other things we can do at some point to try to make the whole thing look better.

"What we believed this offseason, what we believed in spring training, in terms of the potential of this team, the people in the clubhouse, the depth of talent, that hasn't changed. We haven't performed. We've got to find ways to perform, and that's going to come in a number of different ways."