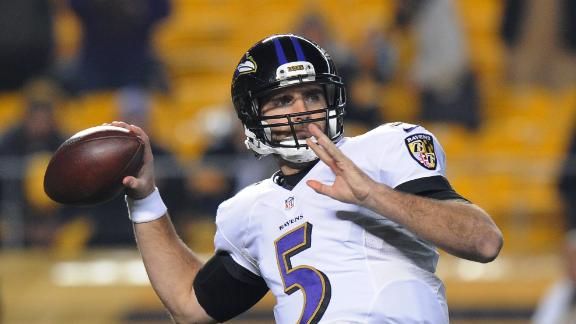 PITTSBURGH -- Baltimore Ravens coach John Harbaugh declared Joe Flacco "the best quarterback in football" for the second time in less than a week.

Harbaugh made the latest grand declaration after Flacco guided the Ravens to a 30-17 wild-card victory over the Pittsburgh Steelers on Saturday night. In the Ravens' first-ever playoff victory over their rival, Flacco completed 18 of 29 passes for 259 yards with two touchdowns and no interceptions, finishing with a 114.0 passer rating.

"Joe Flacco, what can you say," Harbaugh said. "He's the best quarterback in football. We'll take him any day of the week, twice on Sunday or Saturday if that be the case."

Flacco has excelled more in the postseason than the regular season. He has never thrown for 4,000 yards in a season and has never been voted to a Pro Bowl. His 3,986 yards passing this season were a career high, but only 12th-best in the NFL.

But Flacco's play in the postseason has been more impressive. By beating Pittsburgh, Flacco improved to 10-4 in the postseason, including seven playoff wins on the road -- two more than any other quarterback in NFL history. Over his last five postseason games, Flacco has thrown 13 touchdowns and no interceptions while earning Super Bowl MVP.