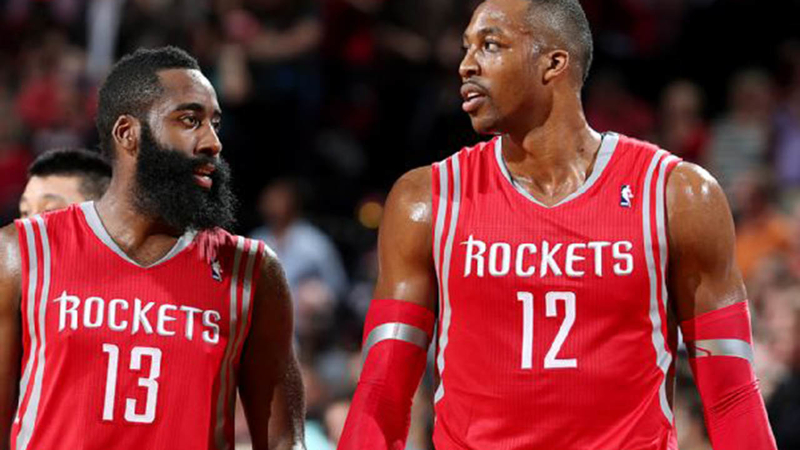 Harden and Howard were teammates for three seasons with the Rockets until Howard declined to pick up his player option this summer.

During a disappointing 41-41 2015-16 season, a source told ESPN the relationship between Howard and Harden was "cordially bad." It's something Harden disputes.

When asked about the perception that the two players had friction, Harden said, "It didn't bother me. I know what the truth is, it's no beef. We never got into a heated argument. It just didn't work out."

Harden said he didn't know why things failed with Howard and the Rockets. The pair led the team to the postseason three times, with two first-round exits and a trip to the Western Conference finals.

"Trust me, if we knew, it would have worked out," he said.

At the start of the season, several players, including Harden, said there was a different vibe to the team. It was perceived that things are calmer, drama-free without Howard.

"Vibe means we have different players and make them feel as comfortable as possible. That's what I meant by different vibe," Harden said. "That's one of the reasons why we had training camp twice in the summer so they can get comfortable quick and then when we came to training camp at the beginning of the season, guys will be playing a lot better. That's the reason for that."

Last season, Howard complained about a lack of touches, even admitting he became disinterested during games. He went to GM Daryl Morey asking to be more involved in the offense. According to Howard, Morey said the team wouldn't give him a bigger role in the offense. Harden said at the time the Rockets needed to get the ball to Howard, but it eventually didn't happen enough.

In the offseason, Howard declined his player option and after the Rockets hired Mike D'Antoni as head coach it meant the end for Howard's time in Houston.

D'Antoni coached Howard for one season with the Los Angeles Lakers and things didn't mesh well. After D'Antoni was hired, the coach said he wasn't asked about retaining Howard, but was open to it.

"I'm not a big post up guy and he is," D'Antoni said Friday when asked about Howard's free agency.