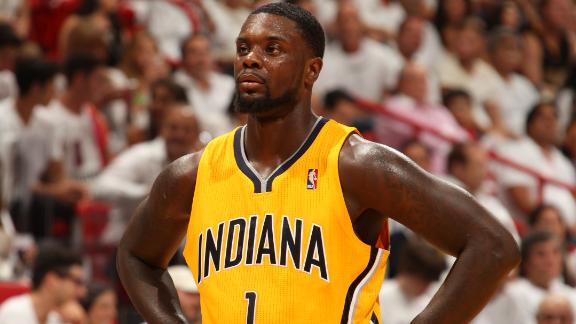 Free-agent guard Lance Stephenson will play for the Charlotte Hornets for the next three seasons. His contract is worth $27 million, league sources said.

The contract, which includes a team option for the final season, ends Stephenson's productive yet volatile four-year stay with the Indiana Pacers.

The Pacers made Stephenson a five-year, $44 million contract offer on July 1. But Stephenson, who led the league in triple-doubles, felt the offer undervalued him.

"Lance is forever grateful for all the love he's received from Pacers fans. He is especially grateful to his teammates, [Pacers coach] Frank Vogel, [owner] Herb Simon, the Pacers management and most of all, Larry Bird," Stephenson's agent, Alberto Ebanks, said in a statement. "While we tried our best to come to the best possible terms for both sides, there was not sufficient flexibility in the terms of the contract, particularly the length of the contract.

"Reports throughout the negotiation process with Indiana have often strayed from the truth but suffice it to say that it was less about the money. Lance will miss the city, the team and the mentor who helped transform him into the dynamic player he has become. He looks forward to making a strong contribution and beginning a new chapter with the Charlotte Hornets."

The Pacers were unwilling to offer Stephenson a shorter deal, spanning two or three years, sources said. Indiana was also unwilling to increase its offer.

The Dallas Mavericks had a two-year, $20 million offer on the table to Stephenson, contingent on the Houston Rockets matching their offer for forward Chandler Parsons. If Houston had matched, Stephenson would have signed with Dallas, sources said.

Like many teams, the Hornets, while fans of Stephenson's play, had concerns about his antics and attitude. But sources say those concerns were alleviated in Tuesday's face-to-face meeting.

Pacers teammates were upset when Stephenson was goaded into his second technical foul in a March win over Miami and again when he publicly challenged LeBron James & Co. during the playoffs. Stephenson also got into a practice scuffle with teammate Evan Turner during the playoffs and was even criticized by Bird, one of Stephenson's biggest fans, after he blew into the ear of James during Game 5 of the Eastern Conference finals.

Pacers center Roy Hibbert, though, tweeted Wednesday that he'll miss having Stephenson as a teammate.

@StephensonLance Damn bro gonna miss having you around. One of the funniest teammates I've ever had. Dinner on you when we come to Char!

Stephenson's Impact On Hornets
Avery Johnson and Tom Penn discuss the impact of Lance Stephenson signing with the Charlotte Hornets and how it affects the Pacers.