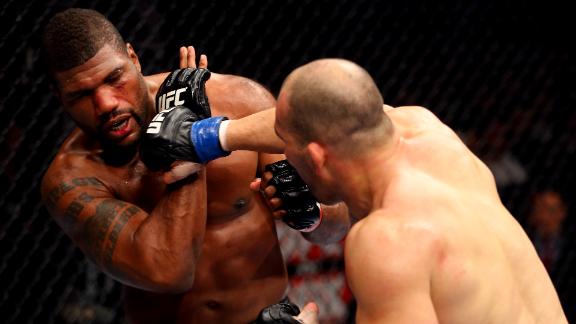 Quinton "Rampage" Jackson will not fight at UFC 186 later this month, after a New Jersey judge granted an injunction sought by his former employer, Bellator MMA, on Tuesday.


Donna Mazzanti of the Burlington County Superior Court of New Jersey confirmed Tuesday's ruling with ESPN.com. The lawsuit, which was filed on March 2, prohibits Jackson from competing in a UFC fight on April 25 in Montreal.

"We are pleased by the judge's ruling and look forward to having Rampage fighting for Bellator again soon," the promotion stated in a release.


The UFC, in a statement, said it didn't expect the ruling but that the event will go on as planned.


"UFC understands that Mr. Jackson is considering an emergency appeal, and UFC is also considering action to protect its rights and minimize damages regarding this matter. UFC 186 in Montreal, Canada, will proceed as planned and UFC is currently evaluating its fight card options."


"Smart move Bellator!" Jackson wrote. "Go to a small town where your company knows the judge, to get a judgement to pissoff your costumers #aintworriedboutnothing."


Jackson (35-11) signed with Bellator on Jan. 17, 2014, and fought three times for the promotion, compiling a record of 3-0. In December, Jackson announced he had terminated the remainder of his six-fight deal, citing multiple contractual breaches by Bellator.


The 36-year-old immediately announced he had re-signed with the UFC, the promotion in which he won a light heavyweight title in 2007. His fight on April 25 against Fabio Maldonado was scheduled to co-headline the card.


According to Jackson, Bellator breached contract when it failed to produce a summary report from a pay-per-view event that Jackson headlined on May 17. Jackson was entitled, per his contract, to receive $4 for every PPV buy above a 190,000 buy rate.


In court documents submitted as part of the lawsuit, Bellator president Scott Coker argued Jackson did not receive a summary of the PPV results on paper, as his manager, Anthony McGann, was threatening to break confidentiality agreements. He said Jackson was paid a PPV bonus of $200,000, even though the event produced a 100,000 buy rate, well short of Jackson's bonus threshold.


Coker stated Bellator has paid Jackson $940,000 in fight purses, bonuses and sponsorships. He also stated Bellator was, "poised to put Jackson into a fight against Bellator's other top star, Tito Ortiz, in the near future."


Jackson is also a former PRIDE Fighting Championships middleweight champion. He has headlined eight UFC events in his career, seven of which ran on PPV. He left the UFC in 2013 on the heels of three consecutive defeats.