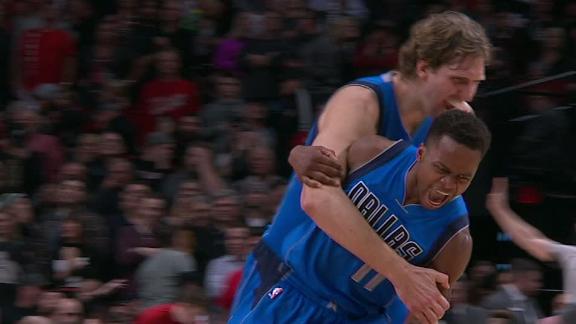 The Mavs are 4-0 since signing Ferrell, who was forced into an immediate starting role due to injuries. He has averaged 17.8 points, 5.0 assists and 1.8 steals in 37.5 minutes per game during Dallas' first four-game winning streak of the season.

Ferrell has outplayed San Antonio's Tony Parker, Cleveland's Kyrie Irving and Portland's Damian Lillard during his 10-day deal, highlighted by his 32-point performance in Friday's 108-104 winagainst the Trail Blazers, when he was 9-of-11 from 3-point range and drilled a dagger with 19 seconds remaining.

"Our guys love him, and we are thrilled by how well he has been playing," Mavs owner Mark Cuban told ESPN via the Dust messaging app.

The Vertical first reported Ferrell had agreed to a two-year deal with the Mavs, bypassing a second 10-day contract. The Mavs, who have no cap space or available exceptions, are limited to offering Ferrell the minimum.

Dallas originally signed Ferrell, who went undrafted despite setting Indiana's all-time assists records, after point guards Deron Williams (toe), J.J. Barea (calf) and Pierre Jackson (hamstring) all suffered injuries. Jackson, who was on a 10-day deal and started his final game with the Mavs, was released to make room for Ferrell.

The 6-foot Ferrell was playing for the Nets' D-League affiliate, where he averaged 18.7 points and 5.8 assists. He played 10 games earlier this season with the Brooklyn Nets, averaging 5.4 points and 1.7 assists in 15.1 minutes per game before being waived on Dec. 8.