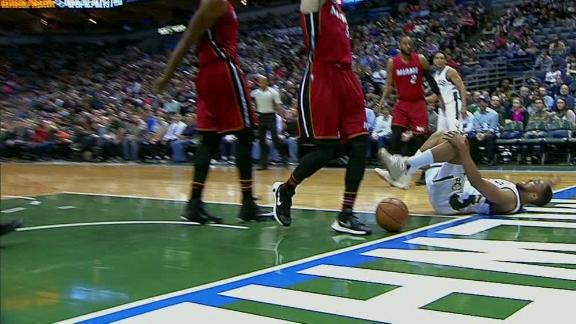 Parker will need surgery after tearing his ACL in the third quarter of the Bucks' 116-88 loss to Miami on Wednesday. The Bucks say the recovery and rehabilitation period will take about a year, meaning he will miss the beginning of next season.

Parker was averaging a career-high 20.1 points and 6.2 rebounds as one of the Bucks' franchise cornerstones and the team's second-leading scorer. Until Wednesday, he showed no signs that the knee was giving him trouble, consistently making explosive drives to the bucket.

Parker went down with 6 minutes, 34 seconds left in the third quarter after making minimal contact with a defender with his body on a drive to the lane. His left knee did not make contact but buckled.

An injury to the same ACL in December 2014 knocked Parker out of his rookie season after 25 games.

The latest injury occurred the same day the Bucks welcomed back key guard Khris Middleton, who missed the first 50 games of the year after tearing his hamstring in training camp.

It's another blow for what is considered an up-and-coming franchise. Parker, Middleton and All-Star forward Giannis Antetokounmpo were supposed to be part of a young core that would lead the Bucks when the team moved into its new downtown arena in 2018.

For now, the Bucks were already struggling even with a healthy Parker and Antetokounmpo. They are 2-11 since moving to two games above .500 on Jan. 13, falling to 11th in the Eastern Conference playoff race.

The hope was that Middleton's return would give the Bucks a boost for the stretch run. A playoff push will be tougher now without Parker, Antetokounmpo's running mate in the frontcourt.

The Bucks might be able to draw some confidence from the 2014-15 season, when they made a surprise run in the playoffs despite losing Parker, the No. 2 pick in the 2014 draft out of Duke.

After hurting his knee that December, the Chicago native returned 11 months later, playing 76 games in 2015-16.