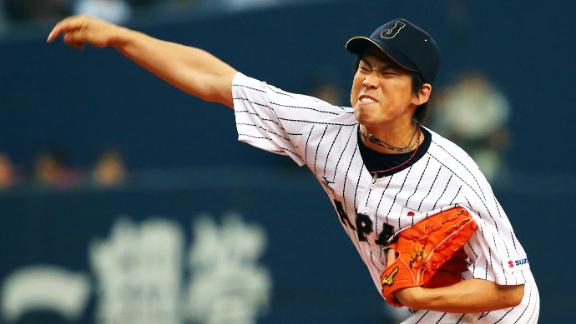 OSAKA, Japan -- Kenta Maeda allowed two hits over five innings, combining on a three-hitter that led Japan over the Major League Baseball All-Stars 2-0 Wednesday in the opener of a five-game postseason tour.

Maeda, a 26-year-old right-hander from the Central League's Hiroshima Toyo Carp, struck out two and walked two before a crowd of 33,003 at the Kyocera Dome. He has expressed an interest in pitching in the major leagues and could be made available during the offseason.

"I am happy to finish my outing with a good result, especially in the first game of the series," said Maeda, who threw 71 pitches and got the win. "They made me throw a few more pitches than I wanted in the first inning, but I got my rhythm after that."

Japan went ahead in the second when Seiichi Uchikawa singled off loser Matt Shoemaker leading off, advanced on Hayato Sakamoto's double and scored on Nobuhiro Matsuda's sacrifice fly.

Sakamoto singled starting off the fourth, and Matsuda grounded into a forceout and stole second. Tetsuto Yamada followed with an RBI single.

Shoemaker, the Los Angeles Angels pitcher who finished second to Chicago first baseman Jose Abreu in AL Rookie of the Year voting, allowed both runs and six hits in five innings, struck out five and walked one.

"It was very good pitching on their part tonight," said Boston's John Farrell, the MLB manager. "We got an opportunity in the first with a couple of men on, but Maeda really settled in and pitched effectively with an assortment of pitches for strikes."

Shohei Otani retired the side in order in the eighth. The 20-year-old right-hander is scheduled to pitch Game 5 before his home fans at Sapporo Dome.

"To see a guy at his age throw nearly 100 mph is impressive," Farrell said. "In one inning of work it seemed like he had a lot of poise. He has a long, loose body with tremendous arm speed."

Yuji Nishino pitched the ninth for the save, giving up a one-out single to Evan Longoria before Justin Morneau lined out to Yamada, who stepped on first for a game-ending double play.

The series, which includes games at Tokyo Dome and Cellular Stadium in Okinawa, marks the first MLB All-Star tour of Japan since 2006. The All-Stars beat a Japan split-squad team 8-7 in a warmup game Tuesday.