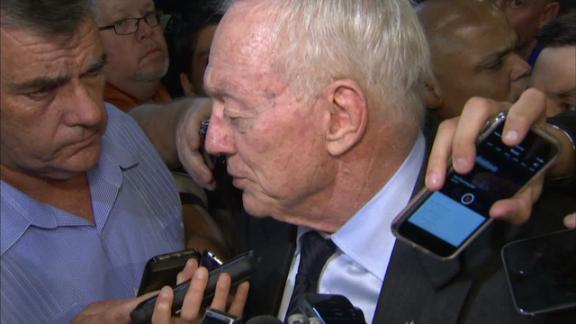 ARLINGTON, Texas -- While there were some "We want Romo" and "Tony, Tony, Tony" chants in the second half of Dallas' 42-21 win over the Detroit Lionson Monday night, theCowboysnever had their franchise leader in passing yards and touchdown tosses take a snap.

Cowboys owner and general manager Jerry Jones does not want Romo to take a snap in Sunday's Week 17 finale against the Philadelphia Eagles,either.

"Because I don't like the circumstance it would come under, which would be injury," Jones said before stepping onto the elevator to his suite after the game.

Dak Prescott will start against the Eagles, and it is possible the team could also activate third-string quarterback Mark Sanchezin addition to Romo. The Cowboys (13-2) already had the top seed in the NFC clinched before Monday night's win.

Romo has not played a snap all season after suffering a compression fracture in his back during an Aug. 25 preseason game against the Seattle Seahawks. He has been Prescott's backup since Nov. 20, but he has had some first-team snaps each day in practice over the past month.

Jones has said he does not believe Romo needs a few game snaps to shake off the rust after not playing in a regular-season contest since Thanksgiving last year. He does not want Romo to play behind an offensive line that could have two backups playing meaningful snaps.

He said there was no plan to play Romo on Monday against the Lions.

"We don't feel like that any game we'd get for him that him stepping out there running a few plays or series would be worth the risk," Jones said.

The only time Romo had not seen the field in any sort of role was during his rookie season in 2003, when he was the No. 3 quarterback behind Quincy Carter and Chad Hutchinson.

Jones believes Prescott needs all the work possible, even with the success the rookie has had. Prescott has 23 touchdown passes and just four interceptions and has thrown for 3,630 yards, fifth most in NFL history by a rookie. With his 13th win, he tiedBen Roethlisberger for the most by a rookie in NFL history.

"Look at what Dak Prescott learned tonight and what's now in his computer that wasn't there before tonight in terms of working withDez [Bryant]in terms of executing the offense," Jones said. "With him being a rookie, we really need all these reps he can get, including any reps we get this week and next week, because we want him to be as educated and as well-prepared and have as much experience as he can when we get in the playoffs."

Coach Jason Garrett wouldn't discuss the Cowboys' plans for Week 17 in terms of who plays and how much. But every player asked, including Prescott, said they wanted to play in Philadelphia.

"I want to play every game," Prescott said. "I want to keep the momentum going. Any reps I can get is making myself better."