Jerry Jones: Tony Romo will back up Dak Prescott next week 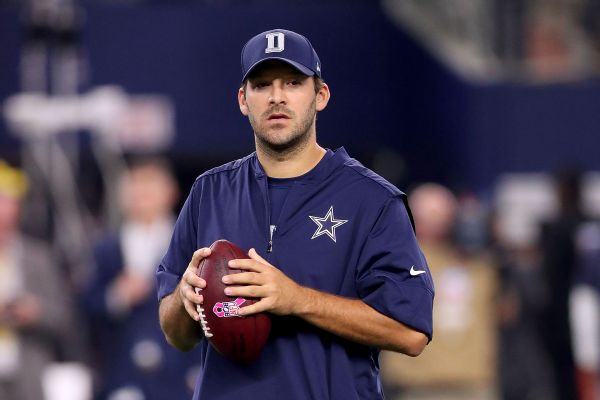 PITTSBURGH -- In the end, the Dallas Cowboys did not have to make a decision on their starting quarterback. Dak Prescott has made it for them.

"We are going to let the decision make itself," owner and general manager Jerry Jones said after the Cowboys beat the Pittsburgh Steelers35-30 on Sunday. "Dak has got a hot hand, and we're going to go with it."

At 8-1, the Cowboys have the best record in the NFL. Prescott has 14 touchdown passes and has been intercepted only twice. Against the Steelers, he completed 22 of 32 passes for 319 yards with two touchdown passes, and he led the Cowboys on a 75-yard drive that started with 42 seconds to play and ended with a 32-yard touchdown run by Ezekiel Elliott with nine seconds left.

"It's just going with the obvious," Jones said. "You are going with how the team is doing right now. It must not be obvious because I get asked about it every time I open my mouth. It's not hard. It's not hard at all. Tony would make the same decision. That's what you do."

Jones said Tony Romo will be Prescott's backup next week against the Baltimore Ravens. Romo was inactive for the ninth straight game as he continues his return from a compression fracture in his back suffered Aug. 25.

Romo went through three full practices last week for the first time since late in the 2014 season, splitting scout-team snaps with Mark Sanchez. Since becoming the starter in 2006, Romo has served as a backup in only one game -- in 2008, when he was replaced by Brad Johnson after he suffered a broken pinkie finger.

"There's no fragileness because Tony is on board to ride this thing out as well," Jones said. "Absolutely. Absolutely. Let me be real clear on that. There is no equivocation. He is totally committed to doing the very best thing to win the game."

Jones actually took some solace in seeing what Ben Roethlisberger did to his defense, throwing for 408 yards with three touchdown passes, in case the Cowboys need to go to Romo, the franchise leader in passing yards and touchdowns, if Prescott struggles or is injured down the stretch.

"You see what a veteran quarterback can do. He gets in there and knows how to dissect and has all of that experience," Jones said. "But you also see what Dak can do. That was a pretty nice little template to look at right there."