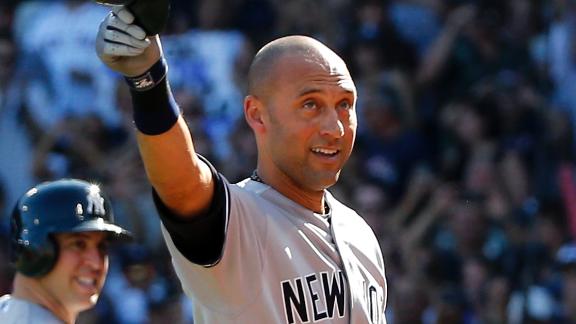 BOSTON -- After hearing Fenway Park filled with chants of his name and picking up an RBI infield single in his final career at-bat, Derek Jeter removed his No. 2 Yankees uniform for the final time without any regrets.

"I felt like the time was right," said Jeter, dressed in a lavender tie and a blue suit during his postgame news conference.

Jeter, 40, removed himself after his third-inning RBI chopped single to third in the Yankees' 9-5 victory over the Red Sox. It was the 3,465th hit of his career, which is the sixth-most in baseball history. He finished his career with a batting average of .310 and was a part of five Yankee championship teams.

Jeter, who grew up in Kalamazoo, Michigan, dreaming of being the Yankees' shortstop, said he would not change even one aspect of his career, describing his two decades with the Yankees simply as "fun."

"I had a blast," said Jeter, who was named the Yankees' captain in 2003. "Listen, I had an opportunity to do what I wanted to do, the only thing that I ever wanted to do. I know that not a lot of people can say that. I've been fortunate. I've had fun. There is not a thing I would change."

Jeter said he plans to take some time off, but he has already started his post-retirement career with Jeter Publishing, an imprint of Simon & Schuster.

Neither during the game nor in his postgame news conference did Jeter grow emotional, unlike on Thursday night, when he fought back tears to single home the game-winning hit in the ninth during his final at-bat at Yankee Stadium.

"You can't top off what happened on Thursday," Jeter said. "I don't care if I came to Boston and hit a home run in every single at-bat. If I hit four home runs, while I was here. For me, personally, it couldn't top what happened. New York has been a special place for me. The way that game ended, at home, you couldn't have written a script that I would've bought into it."

Although Jeter was unemotional Sunday, his manager, Joe Girardi, broke down in tears during his postgame news conference, calling managing Jeter a "blessing." Girardi said he could not imagine another player being able to have the type of joyous day in his archrival's ballpark.

In the third, after the RBI single, Girardi motioned to Jeter at first to make sure he wanted to walk off the field, which was the pregame plan. When Girardi got word that Jeter did, Brian McCann entered as the pinch runner, embracing Jeter and telling the captain, "Congrats, you are the best."

Before Jeter left the field, he visited the mound to shake Red Sox starter Clay Buchholz's hand and tell him he knew the situation was "odd," but wanted to say he enjoyed competing against the Red Sox righty.

Jeter was then greeted by hugs as he reached the Yankees' dugout. The game was stopped for nearly two minutes for all the ovations and chants. It was a bit strange for Jeter to hear so much praise in Boston.

"For them to flip the script this last time coming here, it made me feel extremely proud that I was part of this rivalry," Jeter said.

During a pregame ceremony, Jeter, initially standing alone at short, was greeted by a parade of Boston stars from Carl Yastrzemski to the Boston Bruins' Bobby Orr, the New England Patriots' Troy Brown and the Washington Wizards' Paul Pierce, who donned a Boston Celtics shirt. Pete Frates, who is the former Boston College player credited with giving momentum to the ALS Ice Bucket Challenge movement, was part of the Jeter ceremony. When Jeter completed his challenge in August, he mentioned Frates.

Red Sox third-base coach Brian Butterfield -- the minor league instructor who helped Jeter improve the most after his 56-error season in 1993 -- presented Jeter with customized L.L. Bean boots. The current Red Sox players then came out to visit Jeter, led by David Ortiz. Dustin Pedroia, the final one in the procession, gave Jeter a second base inscribed with No. 2.

Finally, gospel singer Michelle Brooks-Thompson belted the tune "Respect" to Jeter. Ortiz and the other athletes tried to cajole Jeter to dance with Brooks-Thompson, but the reluctant Jeter refused before finally going out and shaking her hand. After Brooks-Thompson was done singing, Jeter gave her a hug.

Jeter had his parents, his sister and his girlfriend, Hannah Davis, in attendance, while the Red Sox brought in Bernie Williams to play "Take Me Out to the Ball Game" on his guitar.

Near the end of Jeter's news conference, he was asked how he will feel about not playing baseball anymore. He sounded very at peace giving up the game.

Jeter Collects RBI Single In Final Game
In his final career at-bat, Derek Jeter drove in a run with an RBI single as the Yankees defeated the Red Sox 9-5. 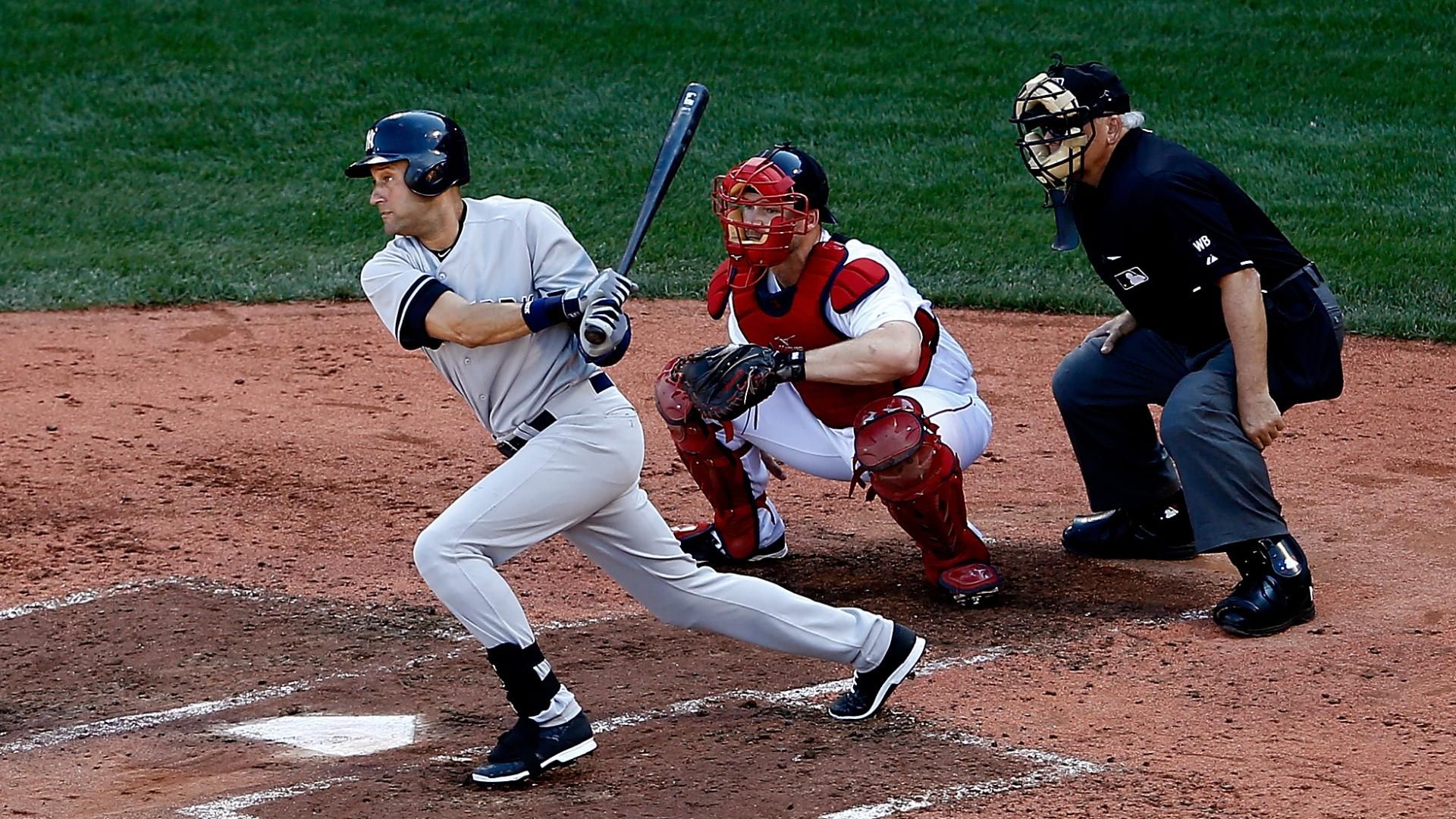