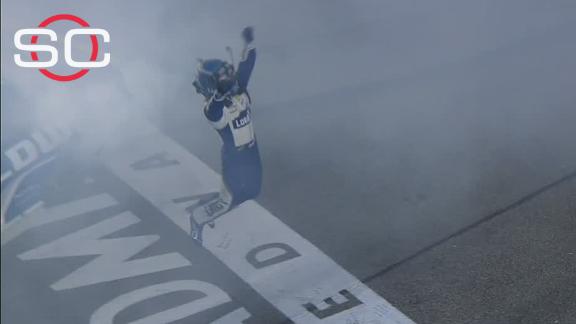 So he has no reason to shy away from talk of an eighth.

Within hours of hoisting his seventh Sprint Cup, Johnson couldn't avoid questions Sunday night at Homestead-Miami Speedway about earning an eighth, a championship that would put him in elite company -- with himself. He currently sits tied with Richard Petty and Dale Earnhardt Sr. for the record with seven titles.

"I don't know what the chances are, but let's go," Johnson said a couple of hours after his victory celebrations. "I'm so excited to put that in front of myself and the team as a hurdle to get over and an accomplishment to achieve."

Johnson swears that all he ever wanted to do was race. He obviously has done more than that with 80 victories and the seven titles -- with the seven coming in a shorter span (11 years) than Earnhardt's first seven (15 years) and Petty's (16 years).

The 41-year-old Johnson won five consecutive titles from 2006 to '10 and then again in 2013, with all of them coming in the 10-race mini-season format. This was his first in the elimination-style format implemented in 2014.

"I had a lot of fun racing for the sixth," Johnson said. "This one and the calm nature and the way we went about business and got it done only gives me more confidence for the future.

Even his car owner, Rick Hendrick, didn't shy away from the conversation. Hendrick has won 12 of the past 25 championships -- seven with Johnson, four with Jeff Gordon and one with Terry Labonte.

"I think the five in a row was pretty phenomenal, and I think winning seven and tying seven is pretty special," Hendrick said. "I'm excited to see him and [crew chief] Chad [Knaus] try to break the record now because we're tied, and you can't go to eight until you get seven."

A seventh title didn't appear likely for much of the 2016 season, which included Johnson's longest winless streak -- 24 races -- of his career. His calm demeanor throughout it all likely helped, especially in the season finale Sunday, when he ran last among the four finalists for much of the race.

He thinks he can bring the same attitude toward trying to win an eighth title.

"I've found a way to put it in that simple mindset here the last couple attempts, in '13 and now in '16," Johnson said. "I think it makes us really dangerous, and I look forward to the challenge of trying to get No. 8."