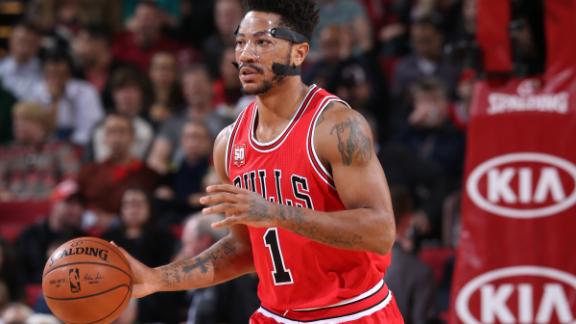 PORTLAND, Ore. -- Bulls All-Star swingman Jimmy Butler plans to ask Trail Blazers big man Mason Plumlee to pay his fine after Butler was called for a technical foul during the fourth quarter of Chicago's 93-88 win over Portland when the two got tangled up.

The play in question came with 4:17 left in the game and the Bulls leading 80-79. Butler tried to set a pick and it appeared Plumlee dropped a shoulder into Butler that knocked him over. Butler responded by tripping Plumlee and going head-to-head with him as the pair exchanged some heated words before being separated.

The referees reviewed the play, giving Plumlee a flagrant foul 1 and Butler a technical foul.

Butler seemed more upset about the fine for the impending technical than he did about the actual play.

"He thought he was playing football for a second there," Butler said after the game. "It's all good though, man. I almost had to let the Fort Greene projects out of me, Brooklyn."

Butler's mention of Fort Greene was in reference to teammate Taj Gibson's hometown. Gibson was standing next to Butler as he spoke to the media. After a couple moments of laughter, Butler said, "Basketball, emotions -- that's part of the game."

Butler said he would ask for the money "nicely" at first, before taking a dig at Plumlee, aDukealumnus.

"I'm going to tell my agent [Happy Walters] to email him or something," Butler said. "I know [his address] is MisterDukie@yahoo.com or something."