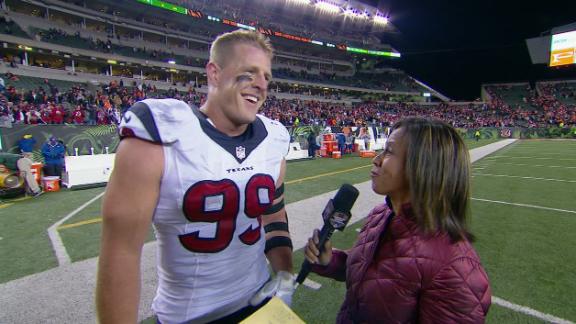 During an on-field interview with ESPN's Lisa Salters following the Texans' 10-6 win over the Bengals, Watt took a shot at Dalton's "Red Rifle" nickname by comparing the passer to a kids' toy gun.

"Our goal was to come out here and make the Red Rifle look like a Red Ryder BB Gun, and I think we did that," Watt said. "He is a great player, and they are a great team, but our coaches put together a great game plan, we executed the game plan, everybody did their job.

"It wasn't pretty. I mean, it was 10-6. That is a great football team over there, but we were able to do some great things on defense to help stop them to only two field goals."

Dalton was quite impassioned when asked about Watt's words during his news conference several minutes later.

"I'm disappointed in him because of the integrity of this game," Dalton said. "I have a lot of respect for him. He's a really good player. There are a lot of kids and people who look up to him, and for him to make comments like that, he's just showing that's acceptable to say that kind of stuff.

Though he said he still hasn't seen the interview for himself, Dalton told ESPN's Bob Holtzman on Tuesday, "There's no feud between me and J.J. I wish him the best the rest of the season."

"I didn't intend to create any controversy," Dalton said, adding that he just answered a question based on how the comments were portrayed by a reporter.

He was 22-for-38 with 197 yards passing in the loss, which ended the Bengals' hopes of an undefeated season and dropped them to 8-1. The game marked the first time since December that Dalton didn't complete a touchdown pass in a game.

Watt was unable to sack Dalton in the teams' previous meeting, but he logged one second-half sack for an 8-yard loss Monday.