Joe Dumars out as Pistons president 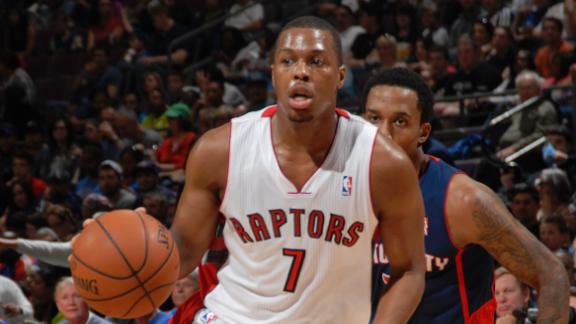 AUBURN HILLS, Mich. -- Joe Dumars tried to push the Detroit Pistons back toward the playoffs with a couple of big moves last offseason.

That didn't work, and now the Pistons will be hiring someone else to replace him.

Detroit has decided not to renew Dumars' contract as president of basketball operations, a person familiar with the situation told The Associated Press on Sunday. The person, who spoke on condition of anonymity because the team has not made any announcement on Dumars' future, says Dumars will remain with the Pistons as an adviser.

Dumars was named the 2003 executive of the year, and the Pistons won the title the following season, adding the 2004 crown to the two they won when Dumars was a player.

But Detroit hasn't made the playoffs since 2009, and the retooled Pistons flopped badly this season.

Detroit has one of the game's top young big men in Andre Drummond, but he's one of the franchise's few bright spots at the moment.

Owner Tom Gores must now hire a new general manager, and in the meantime, ownership executives Phil Norment and Bob Wentworth are expected to supervise preparations for the draft and free agency.

Detroit signed Josh Smith and traded for Brandon Jennings last offseason in what seemed like a return to relevance, but the new-look roster lacked cohesion at times. Coach Maurice Cheeks was fired in February, and the Pistons are 29-52 with one game remaining.

"I think overall we have a quality team as is," forward Kyle Singler said. "I don't know necessarily the formula to win, but we just weren't able to get into a groove earlier on in the year to gain confidence and know that we're a playoff team."

Dumars began running the Pistons in 2000, and he made one shrewd move after another at first, acquiring Ben Wallace for Grant Hill in a sign-and-trade and sending Jerry Stackhouse to Washington for Richard Hamilton.

He brought Rasheed Wallace to Detroit in another trade and signed Chauncey Billups as a free agent. Even a draft day blunder in 2003 -- picking Darko Milicic over Carmelo Anthony, Chris Bosh and Dwyane Wade with the No. 2 pick -- seemed like an aberration when the Pistons beat the Los Angeles Lakers in the finals the following year.

That title, however, is well in the past. The Pistons have played in front of sparse crowds in recent years, struggling to stay relevant in Detroit while the Tigers have drawn fans in droves to their downtown ballpark.

In 2008, Dumars traded Billups in a deal that brought Allen Iverson to the Pistons. That move didn't work out, and neither did the decision to sign Ben Gordon and Charlie Villanueva to big contracts during the 2009 offseason.

Dumars and the Pistons also struggled to find the right coach. When Cheeks was hired before this season, he became Detroit's ninth coach since 1999-2000. Immediately before Cheeks, Lawrence Frank and John Kuester lasted two seasons each, with little success.

When Gores took over as owner after the 2010-11 season, the Pistons were undeniably in a rebuilding mode. Last offseason, Dumars had another chance to show he could guide the franchise back to contention. Instead, the Pistons have been one of the league's most disappointing teams in 2013-14.

Although Dumars is staying with the organization in some capacity, his departure as team president and general manager marks the end of an era. Drafted by the Pistons in 1985, Dumars spent his entire 14-year playing career with the franchise, winning NBA titles in 1989 and 1990.

He was Detroit's vice president of player personnel during the 1999-2000 season before being promoted to president of basketball operations.

Dumars Out As Pistons President
ESPN NBA Insider Amin Elhassan breaks down why the Pistons opted not to renew Joe Dumars' contract as president of basketball operations.