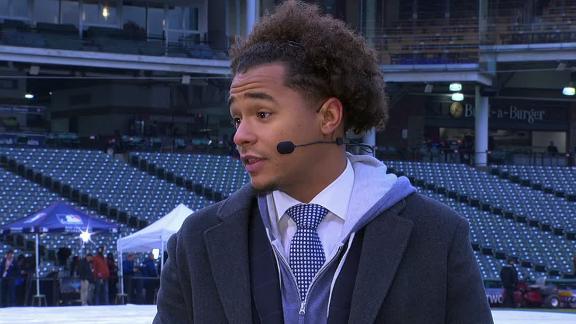 Heyward, who is hitting just .071 in the postseason, hasn't been in the starting lineup since Game 5 of the National League Championship Series against the Los Angeles Dodgers.

"I covered everything," Maddon said Wednesday. "We had a good exchange of thoughts. He didn't leave angry. It was a very open conversation. He's a very good baseball player and a big part of our future. If we didn't have other options we probably wouldn't do it [replace him]."

Heyward signed an eight-year, $184 million deal with the Cubs last winter but struggled for much of 2016. He hit .230 with just seven home runs in 530 at-bats during the regular season, leading to lost playing time late in the year.

"There was nothing that needed to be said to me," Heyward told the Chicago Tribune and other reporters after Game 1, a 6-0 loss to the Cleveland Indians. "He makes the lineup, and that's that. He's going to put the best team out there, whatever he feels like is going to help us win."

Maddon said he and Heyward did talk big picture, as this offseason will be a big one for Heyward. Many in baseball believe some kind of a swing overhaul is needed, as Heyward's tendency this season was to hit soft ground balls to the right side or warning-track fly balls -- even on pitches he hit hard.

"There's no time to get him back in the groove like we were trying earlier this year," Maddon said.

The Cubs manager indicated he'll go game-by-game to determine his right fielder the rest of the World Series.