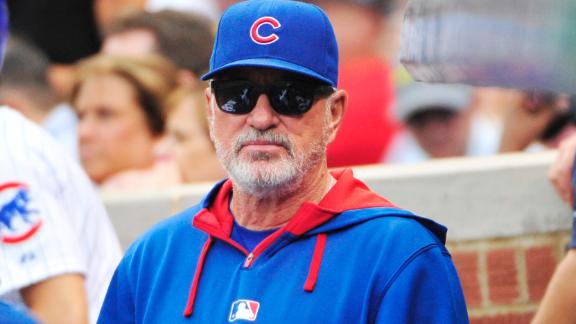 CHICAGO -- Cubs manager Joe Maddon unleashed a tirade directed at the St. Louis Cardinals on Friday after first baseman Anthony Rizzo was hit by a pitch in the seventh inning of the team's 8-3 victory.

The Cubs believe Cardinals reliever Matt Belisleintentionally threw at Rizzo in retaliation for St. Louis outfielder Matt Hollidaybeing hit by a pitch on the helmet in the fifth inning. Rizzo was hit on the leg by Belisle, who was ejected along with Cardinals manager Mike Matheny.

"I'm really disappointed in what the Cardinals did right there," Maddon said after the game. "We did not hit their guy on purpose. That was an absolute mistake.

"To become this vigilante group that wants to get their own pound of flesh, that's absolutely insane, ridiculous and wrong. We don't start stuff, but we will stop stuff."

Belisle said after the game the pitch wasn't intentional.

"I can't control that,'' he said. "Obviously there was a warning [issued after Holliday was hit], but I had to try to pitch in, so what can you do?''

Rizzo also was hit by a pitch in the fourth inning and has been hit a major league-leading 29 times overall this season. He took umbrage with the seventh-inning plunking as he walked a few feet toward Belisle, though cooler heads prevailed. The teams were warned earlier in the game when Cubs starter Dan Haren hit Holliday with the score tied 3-3 in the fifth inning.

"You hate to see [anyone get hit in the head]," Matheny told Fox Sports Midwest. "I'm glad that he was able to, like the guy yesterday (Brewers pitcher Jimmy Nelson, who took a liner to the head), walk away and it's just something that's tough to see."

"I hate throwing inside," Haren said. "I'm not throwing hard. When I go inside on a guy like Holliday I have to miss in. I can't miss over the plate. They were yelling and screaming, but I wasn't trying to do it on purpose."

Having played for the Cardinals in 2003-04, Haren knew exactly what was coming, and told Rizzo as much, apologizing for what he figured was about to happen.

"I apologized to Rizzo [right] after I hit Holliday," Haren said. "I said, 'Sorry you got hit.'"

Maddon also said he was upset by the way the Cardinals defended his team in the late stages of the game. He indicated that if the Cardinals play behind Cubs runners, they'll continue to steal bases no matter how big a lead they have.

"I never read this book the Cardinals wrote way back in the day regarding how to play baseball," Maddon said, fuming. "You can take that book and read it yourself because I don't give a crap about that book. I want everyone there to understand we don't start stuff but we stop stuff."

"They were playing behind us leading by five runs. Next time they do it we're going to run. I want everyone to know that."

Maddon said tacking on runs would have saved him from warming up his closer. But everyone's real anger was directed at the retaliation.

Haren acknowledged it's part of the Cardinals' culture.

"They've been known for policing it that way," Haren said. "Sometimes it goes to a little bit of an extreme. Coming up with the Cardinals, that was just part of it: protecting the big guys."

Haren also indicated it was "up to them" if the bad blood would carry over. The teams have two games left this weekend and could face each other in the playoffs next month.

"I certainly don't think anyone on our side is going to come out and throw at someone," Haren said. "That's for sure."

Maddon grew up a Cardinals fan and said there is no history or bad blood as far as he's concerned, though the teams have been archrivals for decades. Maddon repeatedly indicated they would stop any funny business going forward.

"I don't know who put out the hit," he said. "I don't know if Tony Soprano is in the dugout. I didn't see him in there. We're not going to put up with that from them or anyone else."

Joe Maddon not so cool with the Cardinal way
The Baseball Tonight crew discusses the bad blood developing between the Cubs and the Cardinals and how it is reminiscent of Joe Maddon's 2008 Rays and the Red Sox.