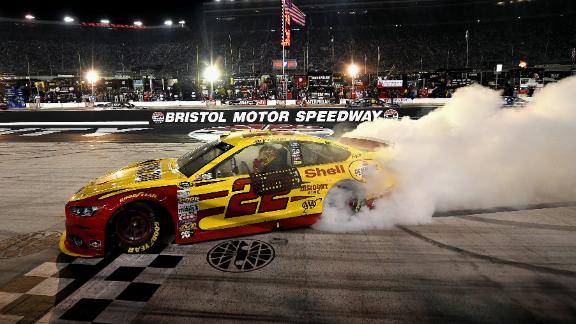 Logano surged past Matt Kenseth with 44 laps to go and won for the first time in his career at Bristol Motor Speedway on Saturday night, foiling the 2003 series champion's gambling attempt to secure a spot in NASCAR's playoffs.

Is there a message in that heading into the Chase for the championship in two weeks?

"That we can win the thing,'' Logano said.

Logano had never won more than one race in a season before this year, and has doubled his career victory total. He also added a cherished notch by winning at Bristol, which bills itself as the world's fastest half-mile.

"I feel like the Bristol night race is maybe the third or fourth biggest race of the year,'' he said. "Just the atmosphere before the race, if it doesn't pump you up, nothing does. It's just the baddest mamma jamma race track ever built.''

He gained the top spot when Kenseth elected to stay on the track when most of the field pitted after a caution flag with 67 laps to go, picking track position and fresh air over new tires. It seemed like a strategy that could work, especially if he could stay in the high groove that gave drivers decidedly more speed off the corners all weekend on the 0.533-mile oval. But the Penske Racing teammates quickly proved it faulty.

"I just knew that clean air was going to be worth more than new tires,'' Kenseth said of his decision after finishing third.

He said he also felt his car wasn't as strong as he liked on fresh tires, and first Logano and then Keselowski foiled his plan.

"They cleared everybody way too fast,'' Kenseth said.

He still remains in great position to make the playoffs, standing fifth in the points race and first among non-winners. His lead is now 90 points over 17th place Kasey Kahne, who has only two races left to overtake him before the field is set. Keselowski never made a serious bid to overtake Logano, though he did pull up to his bumper on the last lap.

"When I'd get right behind him, I'd get in the dirty air and it just pushed too much be able to do anything,'' he said. "The last lap I just dive-bombed it in there on a prayer and kind of hoping it would stick or he would slip of something would happen for me, and made it look cool. But it really wasn't that close.''

It did, however, give Penske a sweep of the weekend, its first since 2006.

Ryan Blaney won the Nationwide race on Friday night, and along with the 1-2 finish, Will Power won the pole in Sonoma in IndyCar on Saturday. Keselowski also won the truck race Thursday, giving Ford its first sweep of NASCAR's top three series since 2006.

Jimmie Johnson, slowed early by two pit road speeding penalties, rallied to finish fourth, his best result since mid-June at Michigan, and Kurt Busch was fifth, rallying on a call by crew chief Daniel Knost with 130 to go after almost being lapped. Gordon remained the points leader despite a 16th-place run. He's 27 clear of Earnhardt and 42 ahead of Keselowski. With 100 to go, it looked possible the series might get a 13th winner of the year.

Jamie McMurray, who led a race-best 148 laps, was leading, followed by Kenseth, and Ryan Newman was ninth. As the final laps clicked off, though, McMurray faded to eighth and Newman, once as high as seventh, dropped to 13th.

Kahne, another driver desperate for a victory or a surge in the point standings, led the race for 40 laps, almost to the halfway point. He then pitted under green with a loose wheel and went two laps down. He wound up 35th.

It was another rough night for Aric Almirola, who has had six of those in a row since his first career victory at Daytona made him one of the unlikeliest drivers to secure a spot in the upcoming Chase. Almirola, who started 42nd after crashing in qualifying, completed just 37 laps before crashing.

"What an amazing race car these guys brought me -- two of them -- and to go out like that is certainly disappointing. But that's racing at Bristol,'' he said. "You get caught up in other people's wrecks.'' 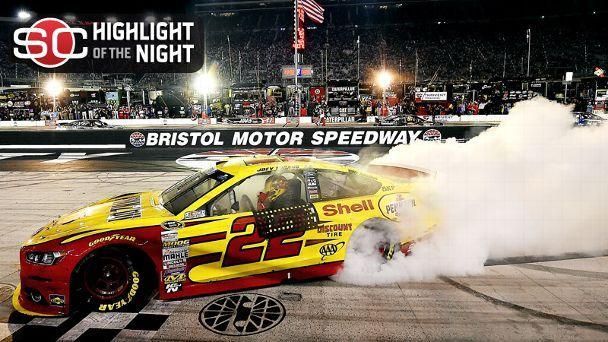 Joey Logano Wins At Bristol
SportsCenter Highlight of the Night: Joey Logano picked up his third victory of the season by holding off Brad Keselowski at Bristol.

Logano Happy With Bristol Win
Joey Logano comments on his NSCS victory at Bristol and what it means for him going forward.