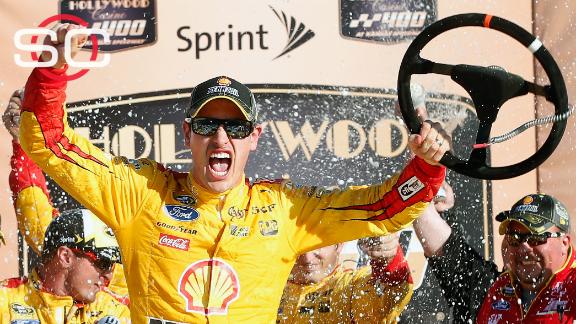 KANSAS CITY, Kan. -- Joey Logano kept peeking around Matt Kenseth as the laps ticked away at Kansas Speedway, the two of them in entirely different situations in the Chase for the Sprint Cup championship.

Logano had nothing to lose. Kenseth had just about everything.

So when Logano got under Kenseth entering Turn 1 with about five laps remaining and sent him spinning across the track, it left many eyebrows raised long after the Penske Racing driver pulled away on the final restart to win his second straight Chase race.

"That's good, hard racing," Logano said. "We were racing each other really hard. I felt like I got fenced twice. He raced me hard, so I raced him back."

Logano was already guaranteed his spot in the next round of the Chase after his victory at Charlotte, though. After a disastrous race a week ago, Kenseth's team arrived at Kansas knowing a victory this weekend or next weekend at unpredictable Talladega might be the only way he could make it to the final eight in the "eliminator" round of the playoffs.

That's why Kenseth was doing everything possible to block Logano.

"I'm really disappointed," Kenseth said. "I was running the lane he wanted to run in, but my goodness, isn't this racing? Strategically, I think it wasn't the smartest move on his part. He'll probably sleep good tonight. I hope he enjoys that one. It's not what I would have done."

Kenseth's version of Logano's move left no room for interpretation.

"But, man, if you are leading the race you can pick whatever lane you want. It's not like he was alongside of me. To wreck somebody for being in a line that you want to be in seems to be kind of risky and not very smart."

Kenseth team owner Joe Gibbs was supportive and proud of his driver's team in postrace comments but chose not to share his thoughts on the controversial contact.

"I have no comment other than everybody saw what happened," Gibbs said. "I am proud of our whole [Kenseth] team. The [Joe Gibbs Racing] guys did a real good job today. That's about all I have to say."

Kenseth wound up leading a race-high 153 laps, but his wild ride with a handful to go dropped him to 14th in the race and, more importantly, last among the 12 drivers in the title race.

"I'm sure we'll talk about it," Logano said after hopping out of his No. 22 Ford. "I just felt like I raced hard. I got fenced twice. I wasn't going to put up with it."

Uh, Joey, you sure about that chat?

"I won't talk to Joey. I don't have anything to talk to him about," Kenseth said. "I'm one of the only guys that I think hasn't been into it yet with Joey, and I've always raced him with a ton of respect. I've actually been one of his biggest fans. I'm certainly not anymore."

Hamlin's second-place finish allowed him to climb to second in the standings, giving him the best chance of everybody outside of Logano of moving on to the next round.

"It was a very good day," he said. "I wanted to be seventh or better entering this weekend, and obviously second was a good run for us. Some of the guys in front of us had some troubles."

Plenty of guys behind him, too.

When the field pitted under green with 53 laps remaining, Martin Truex Jr. had a tire roll away and served a pass-through penalty, while Kevin Harvick drove off with his fuel can and had to serve a stop-and-go penalty. Both lost a lap and precious points in the title race.

Truex got his lap back and finished 15th. Harvick came across in 16th.

Dale Earnhardt Jr., who already felt like he needed to win to advance, had a wheel go loose during a long run and had to pit under green. That dropped him off the lead lap, too, and Earnhardt wound up two laps down and in 21st place heading to Talladega.

"There's no place I would rather go next week," said Earnhardt, one of the best restrictor-plate drivers in the series, and the winner at Talladega in the spring.

The wild finish at Kansas led to a massive shake-up in the Chase standings, with Logano the only driver who can head to Alabama next week without feeling any pressure.

Hamlin, Kurt Busch and Edwards have a bit of a cushion, but everyone else is left hanging in the balance. Truex currently holds down the eighth and final spot in the next round, but he's just six points ahead of Kyle Busch. Ryan Newman is only eight points back.

Then there's Kenseth, now 35 points out of the final spot. If he wasn't facing a must-win Sunday, his late-race spin from Logano left him facing exactly that next weekend.

"I thought we did an excellent job this weekend of controlling the things we could control," Kenseth said. "We did everything as a team to win the race, just couldn't get away enough to keep him from pulling that move on me there at the end."

ESPN.com NASCAR reporter Bob Pockrass and The Associated Press contributed to this report.