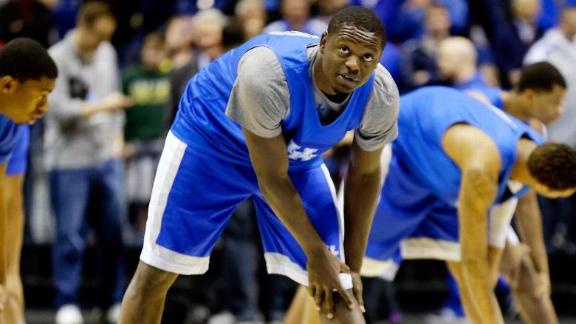 According to several team executives, the 6-foot-9 Kentucky forward's broken right foot hasn't healed correctly -- and sources confirmed a Yahoo! Sports report that Randle may need surgery after the June 26 NBA draft that will keep him out of summer league.

"This is an issue," one executive told ESPN.com. "It didn't heal right."

Randle refuted the report, writing on Twitter: "I never do this but it was brought to me and it's crazy how people put stories out there and have no clue what they are talking about. No disrespect but check with the actual source next time before you put something like that out there."

Randle suffered the broken right foot in the second game of his senior season at Prestonwood Christian Academy in Texas, and a screw was inserted into the foot. Multiple sources told ESPN that there are questions about whether it could become a factor down the road.

Randle, who averaged 15 points and 10.4 rebounds while playing all 40 games for Kentucky as a freshman, is considered a lock lottery pick. However, the injury could affect his draft stock.

Randle will work out for the Boston Celtics on Friday.